It will house retail spaces, private homes, community club under one roof

Buangkok residents at a neighbourhood carnival yesterday were given a first look at plans for a new complex in the area that will house a community club, retail spaces and private homes under one roof.

The project, which will be built on a 3.7ha site next to Buangkok MRT station, is due for completion in 2022.

A three-storey mall below 680 apartments will have a hawker centre and childcare facility.

"Food options around here are quite limited, so the new development is welcome," said administration executive Alicia Woo, 49, who lives in the area. "It's good to have it within walking distance of my home as well."

Fellow resident and engineer Ryan Aw, 38, said: "For me, the childcare centre will be important because it's very hard to get a place around here."

Mr Aw said he could not get a childcare spot for his older child, who is three, and had waited a long time to secure a place for his younger child.

A model of the new development - a $777.78 million joint venture between CapitaLand and City Developments - was set up at the Buangkok Fun Carnival.

The carnival was attended by more than 1,500 residents and MPs, including Senior Minister Teo Chee Hean, who is Coordinating Minister for National Security, and Minister in the Prime Minister's Office Ng Chee Meng. Both of them are advisers to Pasir Ris-Punggol grassroots organisations. 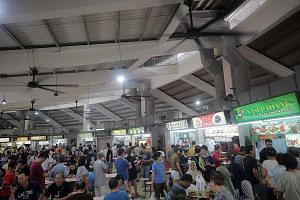 Mr Ng said the new community club will be one of the largest in Singapore, with a 10,000 sq ft multi-purpose hall. "If you look at what we are doing here today... the 4G leadership is serious about engaging Singaporeans, getting them to participate in community projects like this," he said.

"See what we can do together to forge the kampung that we want, and when we scale different things together, the society that we want."

Residents have been asked to give their feedback on the kind of activities and programmes they want to see in the new development.