A nearly two-hour-long outage yesterday, that disrupted critical cashless services provided by Nets, is raising questions about the resilience of such systems amid a nationwide e-payment push.

Services provided by the largest e-payment provider here went down at around 2pm, rendering many unable to use the system to make purchases or top up their CashCards.

Shortly after the failure - believed to be the first in decades - Nets put up a Facebook post informing customers of the problem.

"All Nets services are temporarily unavailable. Nets users will not be able to perform any Nets transactions (including point-of-sales transactions and top-up services) for the time being," the company said.

A Nets spokesman said the incident was not related to any security issues. "No personal data was compromised as a result of this incident," she added.

The Straits Times understands that a "connection module" which linked Nets and the banks had failed and needed to be reset.

The disruption comes just as Nets is ramping up its service to be the unifying force in Singapore's march towards being a cashless society.

The Monetary Authority of Singapore (MAS) said that it took a serious view of incidents affecting "the availability of critical payment systems" and has instructed Nets to submit a thorough investigation report.

"MAS will review the investigation findings and take supervisory action, if necessary," said a spokesman.

According to an MAS notice dated June 2013 on technology risk management, which applies to Nets, the maximum unscheduled downtime for each critical system should not exceed a total of four hours within 12 months.

Experts said yesterday that the breakdown was a wake-up call. 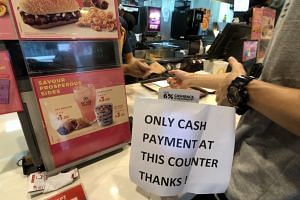 "Payments are the most frequent financial services that consumers engage in. Systems need to be entirely resilient - with no margin for error," he said.

This 30-year-old cashless payment scheme lets consumers use their ATM cards for direct deductions from their bank accounts at some 100,000 acceptance points islandwide.

Affected customers said they turned to credit cards or cash as a backup. A project manager in her 40s, who gave her name as Ms Tay, said she was unable to pay for her beauty treatment at a salon in Toa Payoh. "I paid by Visa instead," she said.

Several retailers such as the FairPrice Finest in Bishan's Junction 8 and the Cold Storage in Bugis Junction put up notices informing customers of the Nets disruption.

Fintech lawyer Koh Chia Ling of law firm OC Queen Street said the incident showed that cash will continue to be important, even if cashless systems become widely adopted: "IT systems will fail. Even in a cashless society, cash will still have an important backup role to play."