SINGAPORE - "Is Yishun cursed, simply unlucky or struck by something stranger?"

These are the words accompanying a clip of Yishun, posted by American video streaming giant Netflix on its Facebook page on Wednesday (March 22) night.

The clip, likely advertising the second season of its hit series Stranger Things, shows a Yishun MRT station sign against a background of the Upside Down, or a parallel universe in the sci-fi horror television series.

A shadow passes by briefly halfway through the 11-second clip.

The 2016 eight-episode series received stellar reviews and ratings, and will be returning for a second season on Halloween this year.

Netizens were amused by the post, which poked fun at Singapore's northern Yishun town and the reputation it appears to have acquired as a seedy place where anything can happen.

Wrote Facebook user Stuart Kuek: "Even Netflix is making fun of Yishun... time to build a wall around Yishun."

But not everyone was amused. 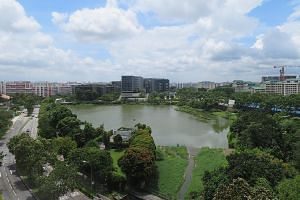 Why do some people make fun of Yishun?

The Straits Times in February wrote about the odd reputation Yishun has acquired for negative news. Reports about happenings in the area range from cat killings, murder, brothel raids and civilians trying to attack policemen with stun guns.

But the made-up phenomenon is driven by media coverage and confirmation bias, experts said.

Nee Soon GRC MP Mr Louis Ng said there are both positive and negative news in every estate, "but a lot more people read the bad news".