Otherwise, national unity and sense of national identity among minorities will be weakened

A minority candidate who runs for president will find it hard to beat a rival from the majority race, all else being equal.

But at the same time, Singapore cannot afford to let minorities be shut out of the highest office of the land for too long.

Otherwise, Singapore's national unity and the sense of national identity among minorities will be weakened.

This frank assessment of how much race mattered in the state of the nation and what is at stake was given by Prime Minister Lee Hsien Loong last night as he made the case for why changes to the elected presidency were needed.

He set out his argument in his Malay, Mandarin and English National Day Rally speeches last night before he took ill.

This is serious, for it concerns our social cohesion, our multiracial society and our future.

PM LEE, on how the current system may not allow Singapore to have a non-Chinese president for a long time.

Mr Lee argued that a safeguard is needed to ensure a minority - that is, a non-Chinese Singaporean - becomes president from time to time. Having a minority president is critical because Singapore is a multiracial society, and the President as head of state symbolises the nation.

Every Singaporean has to be able to identify with him and know that someone of his community can become president, Mr Lee added.

But the reality is that it is hard for a minority candidate to win a presidential election today, as the deck is stacked against him from the start.

Singapore has undoubtedly made much progress in becoming one people, regardless of race, language or religion, he noted.

But findings of a recent Channel NewsAsia-Institute of Policy Studies survey of 2,000 show race relations here is a work in progress.

It found that three out of four people believe race does not influence success. Also, most people believe the interest of one's own race should not come before the interests of other races, a belief held as well by most of the Chinese majority polled.

But Singapore is not completely race-blind.While most Singaporeans across all races accept a president or prime minister of another race, they also said they preferred one from their own race.

"Now that the President is elected in a national election, it is harder for a non-Chinese to get elected as president," he said. 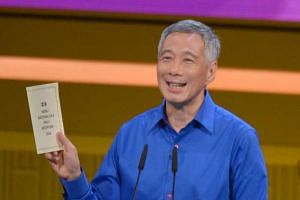 If a minority president is not elected "for a long time, minorities will become disappointed and uneasy, and rightly so", said Mr Lee.

He added that this issue can be politicised and manipulated to provoke ill-feelings in minority communities and divide Singapore in the future.

This is why Singapore must make changes to the elected president system now, while things are still peaceful and the society is united, he said.

Mr Lee also addressed concerns he had heard. These include people asking why such elections could not be left alone to run their natural course.

"Some may feel that since we are a majority-Chinese country, when a Chinese president is elected, it is all right," he said in Mandarin.

But the reality of the multiracial society here is that under the current system, Singapore may not have a non-Chinese president for a long time, he said.

"This is serious, for it concerns our social cohesion, our multiracial society and our future," he said in Mandarin.

Another concern was that changes might compromise the principle of meritocracy.

But he stressed that the same stringent qualifying criteria will be maintained, no matter the race of the candidate for president.

Even after the changes, an elected president from a minority race will still be as fully qualified as any other president, he added.

PM Lee took ill and later, when he returned to the stage, he said he would discuss the issue further on another occasion.

His office, however, released what he was scheduled to have said on the elected presidency in a statement to the media.

Mr Lee noted that it would not be the first time Singapore had introduced special provisions for minorities.

About 30 years ago, it introduced group representation constituencies, or GRCs, in general elections. Candidates had to run in teams that must include at least one person from a minority race.

When the idea was first floated, the minority communities had misgivings, saying it would be patronising and they did not need it, said Mr Lee.

But people now accept GRCs, which are an important stabiliser ensuring there will always be minority MPs in Parliament, whatever the election outcome, he added.

He acknowledges such a change in the elected presidency is a delicate problem that is legally hard to draft, politically sensitive to explain, and something that takes time to accept.

But the change is necessary so that a minority Singaporean can regularly become president "to represent what we feel about Singapore, and our ideal of a multiracial society", Mr Lee said.

It will strengthen racial harmony in Singapore "so that a generation from now, Singaporeans of all races will feel even closer to one another".

A version of this article appeared in the print edition of The Straits Times on August 22, 2016, with the headline 'Need to ensure a minority president from time to time'. Subscribe
Topics:
More
Whatsapp Linkedin FB Messenger Telegram Reddit WeChat Pinterest Print Purchase Article Copy permalink