SINGAPORE - Nee Soon South Community Club (CC) will be the first CC in Singapore to be certified a Super Low Energy Building.

Ms Lee Bee Wah, grassroots adviser and an MP for Nee Soon GRC, unveiled the plans on Sunday (Dec 1) and said impending upgrading works to the building will allow it to halve its energy consumption levels.

Meanwhile, solar panels on the roof will generate energy to cover other consumption needs.

"Climate change is a major issue, and we have to do whatever we can to reduce our carbon emissions," she said.

A Super Low Energy Building, or SLEB, is defined by the Building and Construction Authority as one that achieves at least 40 per cent energy saving based on prevailing codes.

Other than the solar panels, the CC will incorporate other sustainable features such as a design that taps natural ventilation and lighting, as well as the planting of more greenery everywhere.

The building will also have smart energy management systems, which employ the use of technology to reduce energy consumption of lights as well as plug load, or the energy used by equipment that is plugged into an outlet.

Besides becoming a more energy efficient building, the CC will also be the first in Singapore to be dementia-friendly.

That means that there will be clearer signage, zoning of areas by colour, as well as rest areas for seniors. 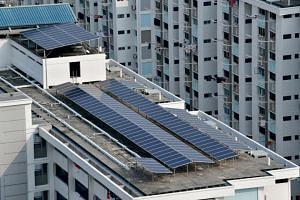 Singapore to ramp up use of solar energy for power needs

This comes after the previously announced plans to have clearer signage for Housing Board blocks in Nee Soon South, as well as fresh coats of bright paint on the walls and pillars to make it easier for dementia patients to find their way home.

"We want to take every opportunity to make our facilities dementia-friendly," said Ms Lee.

The upgrading works are slated to begin in May and are targeted for completion by mid-2022.