SINGAPORE - A Bedok resident has been asked to provide details of a person smoking at the corridor of his unit, after a thermal camera installed by the National Environment Agency (NEA) caught the smoker on several occasions.

In a letter dated June 6 sent to the lessee of a unit at Block 620 Bedok Reservoir Road, NEA stated that a surveillance camera had caught on video "people smoking at the corridor... and entering/exiting from the unit" on 12 occasions from April 11-14.

Smoking at HDB common areas is an offence under Section 3(1) of the Smoking (Prohibition in Certain Places) Act.

According to the letter, the lessee is required to "provide relevant information of the offence such as the identity and address of the person who was smoking at or about the time of the alleged offence(s)".

The letter further states that if the lessee fails to furnish the information within 14 days, he could be charged under Section 4B of the Smoking (Prohibition in Certain Places) Act and fined up to $2,000 for a first-time offence.

Under the same Act, a person found guilty of smoking where it is not allowed can be fined up to $1,000.

NEA said in a statement to The Straits Times that it received 13 instances of smoking-related feedback at the block since February this year.

NEA had "distributed educational pamphlets and worked with the Town Council to engage the residents".

It also conducted multiple rounds of surveillance at the block, including the installation of a thermal camera. 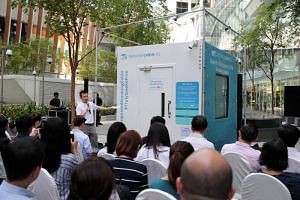 Man claims he was fined $200 with only one foot outside smoking area, NEA says he was outside

Warnings for lighting up in no-smoking zone to end

The camera caught a person smoking along the corridor on 12 occasions, leading to the commencement of investigations by NEA, including serving the letter to the lessee.

NEA will take appropriate actions once investigations have been completed, it said.

In its statement, NEA said that it has installed some 70 thermal cameras since January this year in residential areas and other areas with persistent smoking-related complaints.

The cameras are able to "detect objects emitting high heat and capture images of the smoking offence", enhancing NEA's capability to detect smoking in prohibited areas.

NEA noted that in the deployment of thermal cameras, the privacy of the public is respected.

"The thermal camera focuses only on the common corridors, lift lobbies or staircase landings as these are smoking prohibited areas," it said.

"There are strict protocols governing the viewing of the footage and only authorised NEA staff and the vendor may handle and view the video footage for official purposes. Footage that does not capture any smoking offences will be destroyed after three months," it added.

The thermal cameras are part of NEA's ongoing enforcement efforts against people who smoke at prohibited places. More than 30,000 tickets were issued by NEA in 2018 for smoking offences.