SINGAPORE - No hygiene lapses were found at the McDonald's outlet from which a meal supposedly containing white worms was delivered, the National Environment Agency (NEA) said on Friday.

"There were no expired products found, food items were found properly stored, and there were also no signs of pest infestation on the premises," said an NEA spokesman.

McDonald's has also confirmed that independently-contracted pest control agencies did not find any evidence of pest infestation at the outlet or at their suppliers' premises, adding that the meal in question was currently being analysed.

"The sample provided by the customer earlier in the week was sent for external laboratory analysis and we are awaiting final results of the analysis,"said Ms Patricia Yong, director of operations for McDonald's. 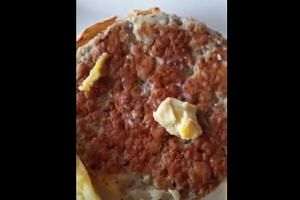 McDonald's looking into case of worms found in Big Breakfast

The checks stem from a complaint by IT freelancer Jasper Lee who claimed that he spotted worms in the Big Breakfast set which he had ordered on Tuesday. The set comes with a sausage patty, toasted muffins, scrambled eggs and a hashbrown.

In a video sent to The Straits Times, several small white worms can be seen wiggling on the sausage patty.

"I had already eaten a few mouthfuls when I spotted something moving, and it turned out to be worms," said Mr Lee, who also lodged a complaint through the fast food chain's online feedback form.

The 27-year-old, who lives in Lorong Ah Soo, had ordered his food via the McDelivery service at around 7.15am. His order was delivered an hour later from a nearby outlet at Block 208, Hougang Street 21.

NEA says that it is working with the fast food chain to review their food safety programme.

Mr Lee said NEA and McDonald's have updated him on their findings.

He told The Straits Times: "I'm relieved that McDonald's found no pests in their kitchens, and that they actually hired external parties to conduct an inspection. They told me that the lab analysis will be due next week, so perhaps that could provide some answers."

Mr Lee said he was told the lab results will be ready next week.

According to Professor Rudolf Meier from the Department of Biological Sciences at the National University of Singapore, worms or maggots  are unlikely to have survived the food preparation process, unless the food is insufficiently heated.

In some cases, maggots might have been laid after the food was prepared but before it was consumed.

This can happen even when there is nothing wrong with the food.

“There are some species of flies that arrive at a carcass within minutes of an animal dying,” Prof Meier told The Straits Times.

“Frozen food is not the likely pathway for the McDonald’s case though because subsequent cooking would kill the maggots," he added.

“But an hour wait is plenty of time for food to cool down and flies to lay eggs," he said, adding that some species of flies lay eggs from which the larvae hatch almost immediately or even lay living larvae.