Fireworks are a staple at the National Day Parade (NDP) and audiences can look forward to even more creative displays this year.

The parade will, for the first time, feature daylight fireworks during the pre-parade segment.

It will also see a fireworks formation of five stars shooting into the sky as the National Anthem is played.

Up to 3,000 fireworks will light up the sky for about 12 minutes on Thursday during the parade, with the highest shooting up to about 240m.

Much care has been taken and time spent towards making the show a success, said Military Expert (ME) 4 Tang Poh Wai, from the Singapore Armed Forces (SAF) Ammunition Command, who is the sea supervising officer of the fireworks committee.

A team of 50 took between 30 and 35 hours over four days each week to set up the fireworks for the National Education shows and previews, he said. The actual parade will require double that manpower, or 100 people.

"There are a couple of challenges, including the weather," ME4 Tang, 52, told The Straits Times during a behind-the-scenes look at the preparations.

"Sunny days are better than rainy ones because moisture will affect the functionality and firing reliability of the fireworks," he said.

Another challenge was building the custom-made crescent-shaped barge with five stars from which the fireworks will be shot upwards, said ME6 Low Miang Hwei, who chairs the fireworks committee. The formation represents "five stars arising", he noted.

"The five stars on the barge weigh more than a tonne in total, and we needed to find a platform that can hold them on the water and still deliver the desired effect," he added. It took the team a month to build the barge with the five aluminium stars. Each star spans 18m and weighs almost 300kg.

Every week, the fireworks are transported from the explosives storage facility in Bukit Timah to the Old Police Coast Guard Headquarters in Kallang, where they are sorted into those to be fired from land or sea. Those fired from the two barges at Marina Bay are brought there by boat. 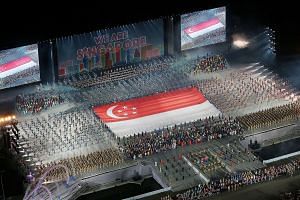 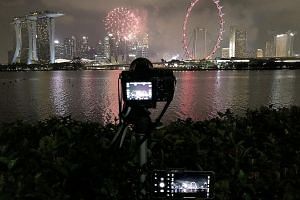 Tips on where and how to take the picture-perfect fireworks

They are then sorted out on one of the barges according to the different types of effects produced.

The fireworks are then loaded into the firing tubes and connected to the firing modules, which are wired to the main firing system located 60m away.

The last step of the process is waterproofing the fireworks with aluminium foil, followed by a plastic sheet and then a canvas sheet, to protect them from the elements.

Organisers spent a year coming up with this year's fireworks show and sourced the fireworks from China, Europe and the United States, said ME6 Low, who is also from the SAF Ammunition Command.

"Fireworks have always been one of the crowd favourites at the National Day Parade, because they have the ability to excite not only the spectators at the seating gallery, but also people who are around the bay," said the army engineer (ammunition).

Safety is paramount. The fireworks have to pass through a rigorous safety test and are fired from a safe distance, said ME6 Low, 39.

The safety distance for stage fireworks is around 5m from the firing point, while it is more than 200m for aerial shells, including high-level fireworks used during the grand finale.

Having a bigger role in staging this year's fireworks show was an opportunity he did not want to miss, said ME4 Tang, an air force engineer who had been a safety specialist in the 2014 NDP.

"I'm really honoured to be involved this year and my kids are quite excited and have been asking me lots of questions," said ME4 Tang, who is married with two sons, age 21 and 24.

Catch the fireworks at these places

1. MARINA BAY PROMONTORY AND THE LAWN

Located across Marina Bay from the floating platform, viewers can enjoy an unobstructed view of the pyrotechnics as they settle down on a picnic mat.

Overlooking Marina Bay, the Merlion Park offers a waterfront view of the display.

Visitors can pose for a photo with the Merlion statue before setting up the camera along the waterfront for a prime view of the fireworks display.

Admire the breathtaking view of the fireworks against Singapore's skyline from the Esplanade Waterfront.

Browse through the shops in Esplanade Mall or have dinner at one of the many bars and restaurants in the area before the show starts.

Bay East Garden at Gardens by the Bay is a landscaped space along the waterfront promenade that offers views of Marina Bay. Because it is farther away from the floating platform, viewers will get a panoramic view of the city skyline and fireworks.

Bay East Garden is located opposite the Supertree Grove and the Cloud Forest and Flower Dome conservatories.

At the far end of Gardens by the Bay is Marina Barrage, a dam built across the Marina Channel to keep seawater out.

Marina Barrage has a spacious rooftop area ideal for picnics and viewing the fireworks display from a distance.

The Sands Skypark Observation Deck atop Marina Bay Sands offers a bird's eye view of Singapore and the fireworks. Entry costs $23 for adults and $17 for children over two years.

The Fullerton Bay Hotel's rooftop bar offers another panoramic view of the Singapore skyline amid a laid-back ambience complete with tapas and cocktails. Entry costs $60 per person, inclusive of a drink.

With up to 3,000 fireworks set to light up the skies above Marina Bay on Thursday, Rahimah Rashith highlights the best spots to catch them.