SINGAPORE - Singaporeans clad in red and white braved temperatures over 30 deg C and queued from midday in anticipation of this year's National Day Parade.

When the gates to the Padang - this year's venue - opened around two hours before the Parade's 5.30pm start, many had already assembled in the City Hall area.

Security checks were conducted at the entrance of the Padang, where there are walk-through metal detectors and X-ray scanners for personal belongings.

This year's safety and security operation involves more than 5,600 people, including armed forces personnel, the police, the civil defence force and volunteers.

The area around the Padang has been designated a "special event area", and strict security measures are in place for the day.

Prohibited items in the area include explosives, loudhailers and firearms.

Checks will be conducted by the police on members of the public who are in the area. 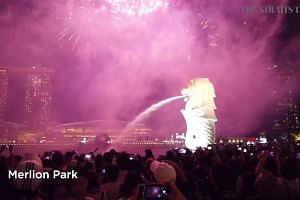 Happy birthday, Singapore: 6 things to look out for on National Day

NDP 2019 blog: Relive the action at the Padang

Drones and other unmanned aerial vehicles are not allowed within the area, and it is an offence to bring or fly the devices in the area without a valid permit.

Those who possess prohibited items within the special event area will have them seized and may face a maximum jail term of 12 months and a fine of up to $20,000.

One of the first spectators to arrive was Ms Charlotte Chng, 34, who is watching the parade with her husband, parents-in-law, and seven-year-old daughter, Sarah.

It is Sarah’s first time at the parade, said Ms Chng. The family of five arrived at City Hall at 1pm and went to queue at the gates at about 3pm, half an hour before they opened.

“Of course, I’m more excited because I’m with her (Sarah) for the first time, so we got a fan and prepared some food too,” said Ms Chng, a business analyst.