SINGAPORE - No public ballot will be held for this year’s National Day Parade (NDP).

Instead, spectators will be made up of Singaporeans who have played a key role in the fight against Covid-19.

NDP 2021 executive committee chairman Tan Cheng Kwee said on Friday (July 2) that attendance at this year’s parade will be on a by-invite-only basis, reserved for “everyday heroes” - Singaporeans who have served on the front lines or in essential roles, or stepped up amid the pandemic as community volunteers.

These would include teachers, hawkers, transport workers and cleaners, among others, said Brigadier-General (BG) Tan.

He added that selection criteria will be worked out with other agencies to nominate the Singaporeans, before invitations are extended to them.

This should take place in mid-July, he said.

On spectator numbers, BG Tan said the organising committee is still working out details with the Ministry of Health, taking into account factors such as the progress of vaccinations here, as well as the status of active clusters.

But he added that NDP 2021 aims to be a milestone event, paving the way for large-scale events when Covid-19 is endemic.

BG Tan said he hoped spectator numbers will surpass participant numbers for large-scale events held in the past year.

Referring to selected pilot events that have had a capacity of up to 1,000 in-person attendees, BG Tan said on Friday: “We do hope that we can go beyond that”.

However, he added that spectator numbers will still be only a fraction of the floating platform’s capacity of about 25,000 spectators.

Spectators will be required to undergo pre-event testing on Aug 9, while there will be no National Education show for Primary 5 pupils this year.

BG Tan added that NDP packs, or fun packs, as they were previously known, will be given to spectators, but only with “essential items”. These include a reusable water bottle, a handheld national flag, and sanitiser.

NDP will be at Marina Bay floating platform with fewer spectators; all must be fully vaccinated

Even as the event returns to The Float @ Marina Bay this year as a centralised event, Singaporeans will still be able to join in the celebrations through activities across the island, the committee said.

The Red Lions are set to make free-fall jumps at various heartland sites on Aug 7 and 8 - the weekend before National Day.

On the day itself, helicopters with the state flag and fighter jets from the Republic of Singapore Air Force will fly across the heartland, while a fireworks display in some residential areas will cap off celebrations at night.

More details on the locations of the free-fall jumps and fireworks displays, as well as the fly-past routes, will be announced later.

This year’s NDP will be the first to feature participants joining in virtually, said its organisers.

For the parade segment, civilian and uniformed groups will participate virtually, while traditional elements such as the Colours Party and contingents from the Singapore Armed Forces and Home Team will continue to be held in person.

The parade and show segments will be catered to audiences tuning in from home. They will be able to enjoy special effects on TV, with the show set to blend live performances and animated short films by local artists.

With rehearsals and the parade on Aug 9 taking place amid the Covid-19 pandemic, the organisers said measures are in place to protect spectators and participants.

About 1,200 participants are involved in this year’s NDP at the float, compared with more than 2,700 who were involved in 2019’s show segment.

The organisers said the number of participants rehearsing at the floating platform has been reduced by about 70 per cent compared with previous years. Some are also some rehearsing at satellite sites at Jewel Changi Airport, the National University of Singapore and Yio Chu Kang Stadium.

All participants are also fully vaccinated, with those involved in spectator management and security receiving both doses two weeks prior to their deployment date, to allow them to build up immunity against Covid-19.

In addition, participants have also been put on a weekly rostered routine testing regime.

The organising committee said self-administered antigen rapid tests will be used for these to allow fast and easy testing for some participants, such as those from the parade segment.

Other safe management measures will be observed, such as keeping participants 1m apart at all times, minimising their contact in performance areas and dividing them into groups of no more than 50, with sub-divisions into smaller groups wherever possible. 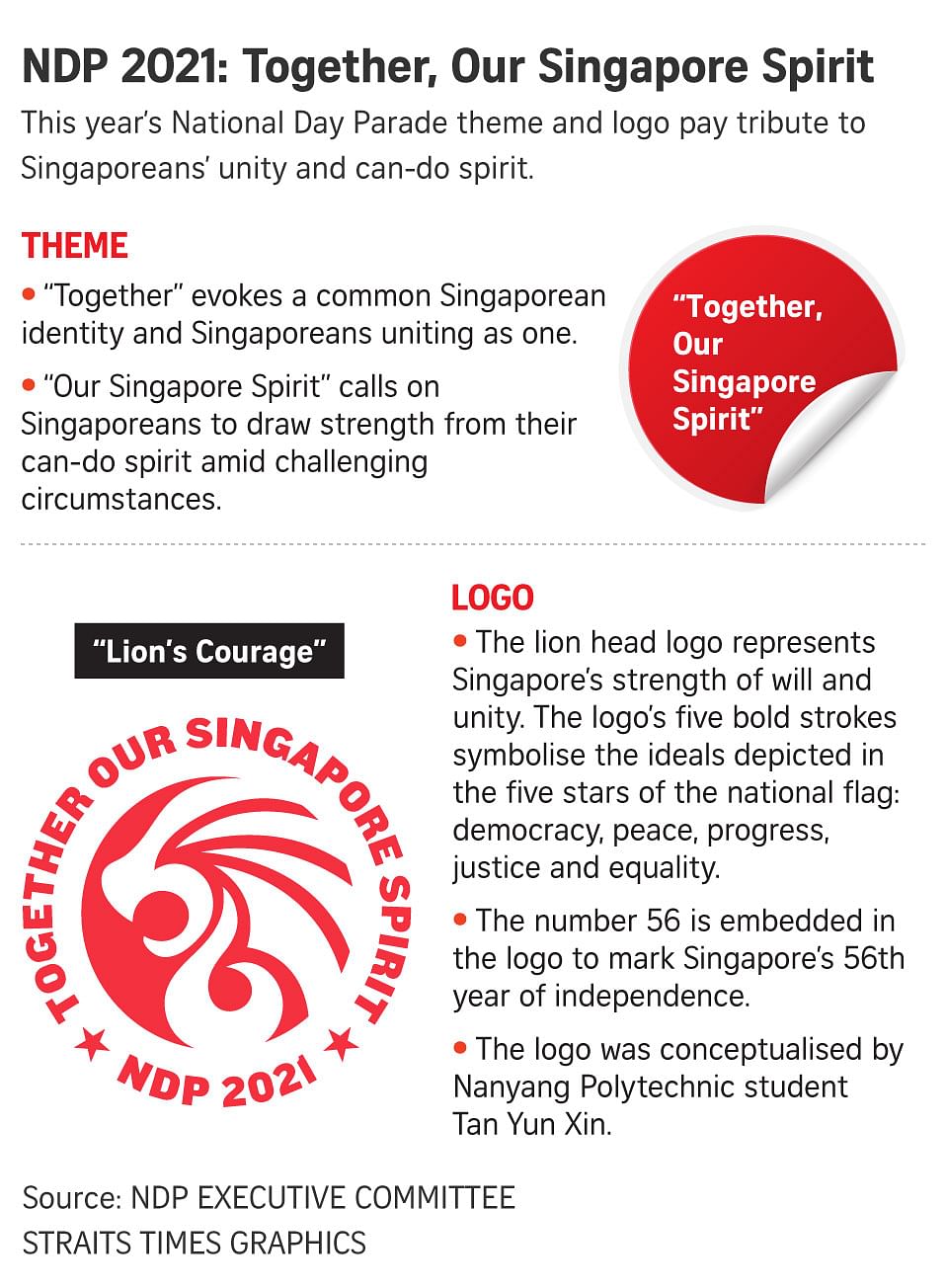