Those attending National Day Parade (NDP) 2018 will get to enjoy not just the show on the floating platform, but also the Marina Bay skyline, which they will get to see in its full glory thanks to a special big screen at the back of the stage.

For the first time, the NDP stage design will feature a set of 10 swivel panels - each 15m tall by 5m wide - which can be configured to serve as a single 50m-wide screen for multimedia projections. The swivel panels will "open up" to provide a clear view of the bay behind the floating platform, where the Aug 9 parade will be held.

Each panel can be controlled independently, and is blank on one side to allow for the projection of videos and images. The other side features a mural of the Singapore skyline.

The deputy chairman of the NDP's infrastructure and decoration committee, Major Chris How, 38, said this year's stage set, which includes a three-tiered stage and hydraulic lifts, is one of the most complicated to be built in NDP history.

Construction began in April and took about 22,500 man hours over two months. The stage can take up to 3,000 performers at any one time, said Maj How, whose team was in charge of building the stage.

"We are very confident that this year, the stage will support the show's performance needs and also bring about a very different experience for the spectators," he said.

One of the considerations in the design of the stage set was for it to be integrated with Marina Bay, said NDP's stage and large props designer Quck Zhong Yi, 38, who is from design firm asolidplan. 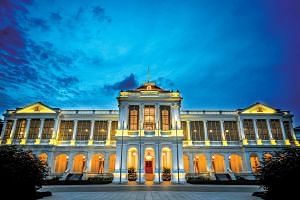 "We were inspired by the bay and wanted to bring the stage as close to it as possible," he said, adding that the shades of blue and grey in the stage design were "pulled" from the colours of the surrounding buildings and water.

He said they took into consideration multiple requirements of the different parade performances and integrated them into the design. For example, the parade segment required a flat stage floor, while the film segment of the show needed a large projection surface.

The film and multimedia elements of the show also aim to evoke a sense of nostalgia, said Lieutenant-Colonel Chew Heng Hwa, 33, chairman of NDP's multimedia and communications committee.

LTC Chew and his team are behind the multimedia content for the parade. He said the new swivel panels gave them the opportunity to showcase their content on a large and dynamic screen.

"It's just like the good old days when you go to an outdoor cinema or a drive-through cinema and you watch the film 'live' in the outdoors. We're trying to re-create this nostalgic feeling," he said.