SINGAPORE - This year's National Day Parade will feature a slew of fresh displays, including unmanned technologies such as drones, 3-D projections, large props and performers suspended in the air and indoor fireworks.

The nation's 51st birthday bash, which will return to the National Stadium after a decade, will carry the theme, Building Our Singapore of Tomorrow.

"NDP 2016 will be forward-looking as we celebrate the first of the next 50 years of our Singapore story," said BG Liow, 46.

"It is about all of us, individually and collectively, anchored on our values and love for Singapore, and building on the contributions and sacrifices of our pioneers, to shape our Singapore of tomorrow."

This year's parade logo was designed by Singapore Polytechnic student Chelsea Lim, 19. Her design, which sports a geometric heart in four shades of red, was shortlisted from about 250 submissions and eventually chosen by a public vote.

"The heart, with its four shades of red, represents the diversity of Singapore and our various races and religions living together in harmony," said Ms Lim, adding that the design represents her love for the country.

The third-year visual communications and media design student spent 10 days during her examination period last year coming up with the design.

"It also projects out into the future with the stroke of the 6 and the starburst at the end," noted Mr Mark, 52. 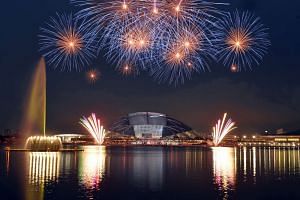 This year's parade is expected to cost $39.4 million - the second most costly after last year's Golden Jubilee NDP, which amounted to $40.5 million.

It is set to involve almost 10,000 participants. The stadium will also allow 275,000 live spectators to catch the show - twice that of previous celebrations.

Several perennial crowd favourites will be excluded from this year's show, however.

The Red Lions will not be free-falling and parachuting into the stadium for safety reasons. Also absent will be the aerial displays and the mobile column of a convoy of military vehicles.

But BG Liow stressed that other popular segments will remain, citing items such as the military tattoo display, the state flag fly past and the fighter aircraft aerial salute.