Nuseir Yassin, popularly known as Nas, had said on March 20 that he and his company, Nas Daily Corporation, would be moving to Singapore to set up a new company, the Nas Daily Media Company.

The New Paper greeted them at the Terminal 2 arrival hall where they were all smiles despite spending a total of 20 hours in the air.

They had flown on Singapore Airlines from Israel to Germany, then to Singapore.

The couple will be temporarily staying at Winsland Serviced Suites by Lanson Place near Somerset MRT. It will act as both home and office until they purchase a house, assisted by 99.co, an online service that helps users find homes for sale and for rent in Singapore.

Nas told TNP: “Travelling for three years leaves you with no residency, no place to call home, and I finally want to settle in a place.

“And I think Singapore is a very welcoming place for setting up businesses as well as a nice country to live in.”

On looking for a home, Alyne told TNP: “We’re very particular. We’re going house-visiting this week, and we’re looking for a house that’s open and spacious where 50 people can visit us, that has good lighting as well. 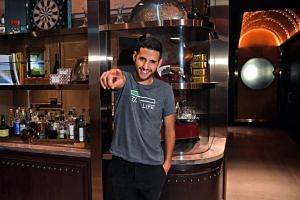 'I'm putting my money where my mouth is,' says Nas Daily vlogger

“We also want different locations to shoot videos in the house.”

Nas and his team, who gained popularity online by posting one-minute videos on Facebook under the page, Nas Daily, plans on exploring and creating content about South-east Asian countries.

These include Vietnam and Indonesia, with Singapore as their base of operations.

On Saturday (April 20), he will be hosting another meet-up event in Singapore at 4pm.

While the venue has yet to be announced, the event page on Facebook has already garnered 2,900 "going" clicks and another 9,300 "interested" clicks.

According to the page, attendees can expect comedy, content creators, a section on social media, T-shirts and memes.

Nas holds such meet-ups in each country he visits, where he implores people there to meet him at a designated location.

It is a fan favourite across the globe and a tradition he will be continuing with the development of his new company.

During the interview at Changi Airport, five fans who recognised Nas and Alyne, rushed forward at various intervals to greet them and to take photos together.

Nas said he’s looking forward to his stay here and will be here for at least seven months each year.

He added: “I’m also excited to see the zoo, but I don’t want to sound like a tourist because I’m here to explore how to make a sustainable company.”