SINGAPORE - A click of the button is all that is needed to automatically fill up e-transaction forms of locally-registered businesses from 2018.

This is happening as the Government extends the integration of its digital vault of personal data to the private sector.

GovTech, the government agency which oversees technology transformation in the public sector, launched the MyInfo Developer and Partner Portal on Friday (Nov 10).

They provide commercial partners with the tools to use MyInfo, which allows users to auto-fill e-transaction forms online.

Launched in May last year, MyInfo pulls personal data, such as names, NRIC numbers and addresses, from public agencies.

It was initially rolled out for only a handful of e-transactions on some government portals. They include the application for or renewal of work permits for domestic helpers, and new public housing and Baby Bonus scheme applications.

With MyInfo, users can do away with manually filling in online forms. Instead MyInfo will auto-populate all form entries.

It will also do away with the need to submit supporting documents, such as NRIC scans or proof of address. 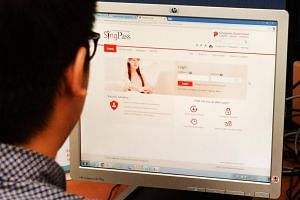 The extension of MyInfo to the private sector will mean users can fill up e-forms for other commercial platforms such as telcos and utility companies. GovTech said more than 100 businesses in the private sector such as telecommunications, utilities, banking and finance have expressed interest in MyInfo.

The move follows a MyInfo pilot with four banks - OCBC Bank, United Overseas Bank, DBS Bank and Standard Chartered - earlier this May, which did away with the need for users to submit supporting documents when opening new bank accounts or applying for credit cards.

Four more banks - Citibank, HSBC Bank, MayBank and American Express - will be on board by the first quarter of 2018.

GovTech's government chief information officer Chan Cheow Hoe said: "With MyInfo made available to a wider range of business transactions, we can help remove the need to verify documents, and even reduce time spent on face-to-face meetings." This significantly improves business efficiency as companies can get their customers on board more quickly, he added.

The agency added that as the security and privacy of citizen data is the key priority, businesses will have to seek consent from customers at the point of every transaction before any data is added for their use.

The developer portal, for coders to develop applications and services to integrate with MyInfo, will open from Friday (Nov 10).

Businesses that want to sign up for this integration can start doing so in December by using their CorpPass to log into the portal.

They will then be considered on a case-by-case basis, such as whether there is compliance with the Personal Data Protection Act and whether they are requesting relevant data for their business use.

Results from this year's pilot with the four banks showed a decrease of 80 per cent in application time for customers, and 15 per cent higher approval rating due to MyInfo's higher-quality data.

Standard Chartered Bank head for products and segments in Singapore and Asean and South Asia, Mr Dwaipayan Sadhu, said the MyInfo adoption rate has been encouraging and steadily increasing, and that the bank expects the trend to continue.

"The bank will continue to expand access to MyInfo, and plans to integrate all key deposit and unsecured products with MyInfo in the coming months," he said.

There were about 200,000 users who signed up for MyInfo, as of September. That month, GovTech announced that all 3.3 million SingPass users will be enrolled in MyInfo by the end of the year, and this will sharply increase the number of users of the service.

Senior Minister of State Janil Puthucheary, who is in charge of GovTech, had said then that MyInfo is the next step towards forming a national digital identity for every resident, layering on the 14-year-old SingPass authentication system set up for Singapore residents to access e-government services.