In a statement yesterday, the United League of Arakan said the association was merely collecting money to help those displaced by the civil war in Myanmar's Rakhine state, and not for the AA's "National Fund".

The statement comes after the Ministry of Home Affairs (MHA) announced on Wednesday that it had arrested several Myanmar nationals and would deport them for using Singapore as a platform to organise support for armed violence, saying this was inimical to the Republic's security. The individuals had given funds to the AA.

The AA, which is fighting for greater autonomy for Rakhine state, is designated a terror group in Myanmar.

While the ministry did not mention the AAS in its statement, three of those deported - Ko Hein Zaw, Daw Aye Myat Mon, and Ko Ye Kyaw Htet - were identified by Myanmar media as committee members of the AAS.

This raised questions about the links between the AAS and the AA.

The association, previously known as the Rakhine Society (Singapore), celebrates cultural events like the Myanmar Water Festival, and has held gatherings at places such as a community club and country club in Singapore. 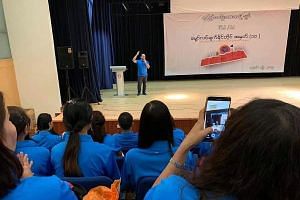 The Straits Times understands that its members collected a substantial sum in monthly donations that is sent back to Rakhine state.

While the association has not issued any official statement, its members have been quoted by Myanmar media as saying that it provides social services for the Arakan community and does not engage in illegal activities.

The political wing of the AA reiterated this yesterday, describing the AAS as a "social and charity" organisation. It added that international Arakan communities played a big part in providing humanitarian aid and donations to Arakan war refugees in Myanmar's Rakhine state, and said the arrests and deportation of Myanmar nationals working in Singapore was detrimental to this effort.

The statement, posted on a Twitter account associated with the AA, also accused Singapore's Government of collaborating with the Myanmar government to "crush a social organisation".

"The dignity of Singapore (Government) has gone into the toilet for cooperating with war criminal Myanmar army," the account said, adding the deported individuals had been arrested in Myanmar.

The Straits Times understands that the MHA took action based on its assessment that the individuals posed a security threat, having used Singapore as a staging ground to solicit support, and raise funds, for armed violence.