McDonald's runs out of limited-edition item by 11.30am after releasing it for sale from 4am

Fans of Sanrio's My Melody waited in line at McDonald's outlets islandwide from the wee hours of yesterday for a chance to snag limited-edition food holders featuring the adorable bunny.

Early birds were able to buy the holder at $6.90 each with any McDonald's order. The holders are priced at 890 yen (S$10.80) each in Japan. They come with compartments to hold a cup, burger and fries. Each person can buy up to five holders per transaction.

A McDonald's spokesman said the holders were sold out across Singapore by 11.30am. There is currently no plan to bring in additional stocks, the spokesman added.

McDonald's Singapore brought in the holders after the collectible soared in popularity across Japan.

They were available from 4am at all outlets here, including McCafe and McDonald's drive-thru outlets, but not at dessert kiosks, or via McDelivery and GrabFood.

As part of crowd control measures, several outlets distributed a queue ticket to those in line. This ensured that customers were able to buy the holders in a smooth and orderly manner despite the overwhelming demand, said the spokesman.

Instagram user Jacejace, who posted a photo of the long queue in Bendemeer and a box of at least four holders, said it took her about an hour before she got the items.

Another Instagram user kimyong85 shared a photo of his purchase at about 5am at the drive-thru outlet in Hougang Avenue 3.

Instagram user snowbleu21 managed to avoid the queue when she stopped by the Kallang outlet on her way to work. The queue began only when she had placed her order, and stocks ran out after she had collected her items. 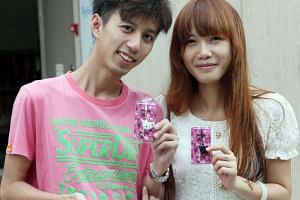 Others, however, were puzzled by the queues outside their homes in the early morning. Twitter user Missus Mellow said people had gathered at the McDonald's in her neighbourhood from as early as 6.45am.

Some people took to social media to express their disappointment that the merchandise was sold out.

Twitter user Martin Ang said it was "unpleasant" to learn that the holders were all gone when he arrived at the Bukit Merah outlet at 7.45am.

The holders appeared in several listings on online marketplace Carousell soon after 4am, with a few going for as much as $40.

This is not the first time that McDonald's merchandise has caused a storm here.

In 2013, Hello Kitty fans braved the haze to queue up to buy a new McDonald's plush toy of the Sanrio character.

The three-hourly Pollutant Standards Index had hit a high of 321, but many waited in the open for the limited-edition Ugly Duckling Kitty.