SINGAPORE - For more than 30 years, Ustaz Mohamad Hasbi Hassan has contributed significantly to Islamic education and development of religious teachers, as well as religious rehabilitation.

Since 1986, he has served in the Singapore Islamic Scholars and Religious Teachers Association (Pergas), which aims to raise the quality of Islamic education and welfare of religious teachers.

On Saturday (Sept 28), Ustaz Mohamad Hasbi, 59, was the sole recipient of the Islamic Religious Council of Singapore's (Muis) Jasa Cemerlang Award, which honours lifelong achievements and contributions to Muslims in Singapore.

He is the current co-chairman of the Religious Rehabilitation Group, which provides counselling for radicalised and self-radicalised individuals, and is also a Muis council member.

He is also a full member of the Fatwa Committee, which issues religious guidance to Muslims in Singapore.

Last year, he was one of six religious leaders who received the Meritorious Service Medal, one of the highest awards for a public servant.

Ustaz Mohamad Hasbi said that there are some segments of the community which have yet to understand the importance of living harmoniously and cohesively, and this is an issue he seeks to address with other stakeholders in Singapore.

For him, the development of the community is more important than receiving any awards.

"This award is not for me. To me, this award is to the group of asatizah (religious teachers) who make their effort to work for the harmony of our country," Ustaz Mohamad Hasbi said. 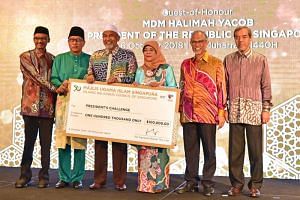 Honoured for service to nation

Eight people received the Jasa Bakti awards for their long service to the community.

Among them was Ms Norain Mohd Noor. The 52-year-old nursing lecturer at Nanyang Polytechnic has been a voluntary nursing officer in the Singapore Pilgrims' Affairs Office (SPAO) in Muis since 2001.

Ms Norain, who is single, started becoming more involved in medical logistics for haj pilgrimages from 2003, and also designs curriculum and conducts training for other volunteer nurses.

Her two siblings, who are also nurses, are involved with SPAO as well.

To Ms Norain, winning the award does not mean the end of her service.

"I'm willing to do more. Not that I expect recognition, but I'm thankful that people recognise me so that I can (contribute) more."

Muis also presented President Halimah Yacob with a cheque for $100,000 for the President's Challenge. The amount was raised by the Singapore Muslim community through various charity drives.

The awards ceremony, held at the Gardens by the Bay, was also attended by Minister-in-charge of Muslim Affairs Masagos Zulkifli, who is also Minister for the Environment and Water Resources, and Mufti Fatris Bakaram.

In his speech, Muis chief executive Esa Masood said that volunteers are the lifeblood of the Muslim community in Singapore.

The Muis council and its institutions are strengthening processes and improving training to help volunteers, Mr Esa said.

"The skill sets and capabilities we are building in our volunteers are all part of the foundations of a community of success, which is defined by character, competence and citizenry."