In a Facebook post, Madam Halimah said that as the wife of one of the country's most well-loved Presidents, Mrs Wee served the people with grace.

"She was a steadfast advocate of education and providing opportunities for disadvantaged children and youth," Madam Halimah wrote.

"Active in supporting charitable causes in these areas during Dr Wee's presidency, Mrs Wee continued to do so in later years."

Madam Halimah said she and her husband were deeply saddened to learn of Mrs Wee's passing. 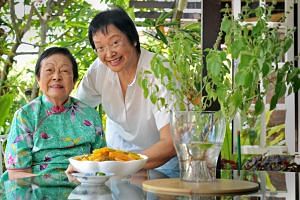 Among her various contributions, Singaporeans will perhaps most of all remember Mrs Wee for her selfless dedication to the late Dr Wee, Madam Halimah added.

"Throughout their 69 years of marriage, Mrs Wee always stood by and supported Dr Wee. Their love story will remain an inspiration to many."

He told reporters on Sunday that he met Dr Wee and Mrs Wee many times when he was a senior civil servant, and they were always very gracious.

“They have conducted themselves extremely well, they have showed great care and concern for the community, they have done an outstanding job, so I’m very saddened to hear about the passing of Mrs Wee.”