Efforts to reduce the three big waste streams - food, packaging and electronic waste - will be bolstered with the passing of the Resource Sustainability Bill in Parliament yesterday.

In all, 16 MPs spoke during the four-hour debate on the Bill, which they supported, even as they offered suggestions on how Singapore could do even better.

Several MPs asked how the regulations will account for online retailers, especially those that ship their products from overseas.

In response, Senior Minister of State for the Environment and Water Resources Amy Khor said that all Singapore-registered producers will be covered, even if they sell their goods online.

Non-Constituency MP Daniel Goh said that Singapore's social norm of prioritising convenience is undermining efforts to encourage recycling. This is why Singapore has hit a "green ceiling", and why recycling rates have remained stagnant, he said.

He suggested that Singaporeans could be "nudged" to think more about the cost of convenience by, for example, mandating that households purchase and use government-certified bags for rubbish disposal. 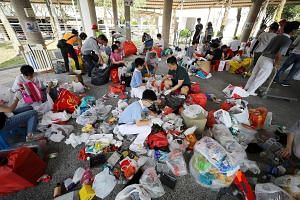 Similarly, Nominated MP Walter Theseira said that the "throwaway culture" exists because it is cheap. The underlying issue is underpricing, he said.

Goods have no price attached to reflect the problems that their disposal will create, he said, pointing out that even in countries where bottle deposits and other taxes are applied to encourage recycling, the prices seemed "incorrect and too low".

He suggested that one possible solution could be to impose a prepaid disposal fee on new electronic products at the point of sale.

She said requiring producers to collect and treat their products when they become waste will motivate them to reinvent them and minimise trash.

Recalibrating consumers' expectations of items like goodie bags, toiletry bottles in hotels and individually wrapped buns can break the cycle of wasteful practices, she said.

And rather than relying on punitive measures, more schemes to reward companies and consumers for their sustainability efforts could be introduced, Professor Lim added.

He suggested that Singapore's supermarkets can consider taking their cue from overseas supermarket chains like Waitrose in Britain that have "nude zones".

"I would love to one day walk into our supermarkets in Singapore and see 'nude' vegetables and fruits without any plastic packaging," he said.

A version of this article appeared in the print edition of The Straits Times on September 05, 2019, with the headline 'MPs share ideas on how to improve recycling'. Subscribe
Topics:
More
Whatsapp Linkedin FB Messenger Telegram Reddit WeChat Pinterest Print Purchase Article Copy permalink