SINGAPORE - Four motorists stopped to help an injured motorcyclist on the Pan-Island Expressway (PIE) on Friday (Sept 15) morning, with netizens lauding them after a video of the incident was posted online.

Mr Heath Tan, one of the four who stopped to help, posted a video of the process on YouTube and shared it to Facebook group SG Road Vigilante.

Mr Tan, a 32-year-old programme executive who works in the education industry, told The Straits Times on Friday that he was on his way to work around 8.45am when he noticed traffic congestion after the Stevens Road exit.

"I saw that a motorcyclist was on the road, and I saw some people going to help - a female driver, a male driver and another motorcyclist," he said. It was raining at the time.

He said the motorcyclist, who appeared to be in his late 20s to early 30s, had skidded. He had a deep gash on his hand and scrapes on his knees and hips.

"For his safety we wanted to take his bike to the left side," he said.

After shifting the motorcycle, Mr Tan asked the injured motorcyclist to call a tow truck as he said he should not continue his journey. He also asked his family members to pick him up.

Asked why he stopped to help, Mr Tan said: "We are all motorcyclists. When we see another rider fall down, usually we will stop and help because it could be one of us at any time."

Mr Tan, who has been riding a motorcycle for five years, said he was also influenced by past reports of good Samaritans who stopped to help strangers on the expressway. 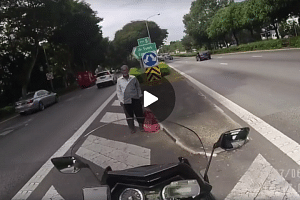 In June, an off-duty policeman earned praise online after a video of him helping an elderly man stranded on a highway divider went viral.

Later that same month, another motorcyclist offered a lift to a man stranded on the road shoulder of an expressway.

Mr Tan said that has stopped to help fellow motorcyclists on the road before - when they ran out of fuel or had minor accidents.

"Us bikers in the community when we see one another in any difficulty, we will help," he said. "Motorcyclists should all ride safely."

Hong CL Angel wrote: " I applaud you for your level-headed sense of awareness by suggesting removing the bike to a safer spot and your big heart with compassion, simply by stopping to help, and the same commendation goes to those who stopped to render assistance. Good deed performed!"