SINGAPORE - Motorists on the Bukit Timah Expressway (BKE) on Monday (Aug 3) were treated to a rare sight - money strewn all over the road.

The Straits Times understands that the incident took place at around 6.20pm near the area where the Seletar Expressway (SLE) connects to the BKE.

A YouTube video uploaded by the Singapore Reckless Drivers Community on Tuesday showed a sizeable swathe of the expressway littered with RM50 (S$17.90) notes.

The video, taken from a vehicle's dashboard camera, showed several motorcycles and vehicles parked on the left road shoulder as people rushed to pick up the notes.

Cars filtering in from the left were forced to slow down in order to avoid them.

Administrative assistant Annie told Lianhe Wanbao that she was passing by on a double-decker bus when she saw the notes flying in the air.

The 50-year-old added that some passengers even asked the driver to stop the bus so they could alight to pick up the notes, but he refused. 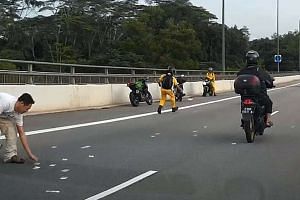 She estimated that there was at least RM10,000 worth of cash.

Businessman Mr Liu, speaking to Shin Min Daily News, thought the notes were just pieces of paper as he was driving past with a friend.

"But when I slowed down for a closer look at one of them, I discovered that it was actually a RM50 bill," added the 60-year-old.

It is not clear how the notes ended up on the expressway.

Under Section 403 of the Penal Code, the offence of criminal misappropriation of property - if the person who picked up the notes knows who they belong to - carries a maximum jail term of two years and/or a fine.