SINGAPORE - Sunday (May 12) is mother's day, and President Halimah Yacob and Prime Minister Lee Hsien Loong were among those who wished all mothers in Singapore a happy Mother's Day.

Madam Halimah wrote in a Facebook post on Saturday night that mothers "deserve mention not just once a year, but every day for (their) unstinting love, devotion and care for (their) family."

She shared that although her own mother had passed away in 2015, she remains grateful to this day for everything that she had done for her.

Madam Halimah said that when she was eight, her father died, leaving her mother to raise her single-handedly.

"Life was difficult and there were moments when I felt like giving up but my mum's strength and indomitable spirit kept me going," she wrote.

She then went on to commend two mothers who she had met a few weeks before, for displaying the same courage, dedication and love.

One is 91-year-old Madam Chua Bang Choo, who devoted her entire life caring for her 62-year old son who is intellectually challenged.

Madam Chua became the family's breadwinner and her son's sole caregiver after her husband died, 40 years ago. 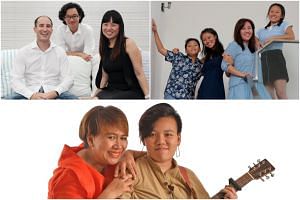 Cycling: Mum's turn to have fun at OCBC Cycle on Mother's Day

Mothers and their inscrutable ways

Madam Halimah said that Madam Chua's main concern was the fate of her son if she were to pass on.

"So deep is a mother's love that even when she realised the inevitability of her passing, she still worries for him," wrote the President.

The other isMadam Jasmine Lee Jin Zuan, whose age Madam Halimah did not specify.

Her daughter was born with multiple rare disorders which has left her bed-bound.

Madam Lee gave up her career to become Sarah's full-time caregiver, and was one of the founders of "Special Seeds Singapore", a digital initiative that creates awareness about children with special needs.

"How wonderful and selfless! Struggling with her own challenges, this mother has enough compassion and love to spread around to others," she wrote.

Remarking that mothers are "a special breed", she said: "Perhaps when mothers were created, they were given an extra dose of everything that is good in a human being."

Aside from the President, many others also shared their wishes and tributes to mothers on social media.

We highlight a few:

PM Lee shared a photo of a new hybrid orchid, the "Aranda Mothers of Singapore", which was unveiled at the People's Action Party Women's Wing's special bicentennial tribute to mothers on Saturday.

He said that the orchid, which was specially commissioned for the SG Bicentennial, is dedicated to all mothers in Singapore.

"This beautiful orchid is a tribute to all the wonderful mothers for their hard work, unceasing patience, and boundless capacity for love," he wrote, wishing all mothers and mothers-to-be a happy Mother's Day.

Another person who featured the new orchid in their post was Minister for Manpower and Second Minister for Home Affairs Josephine Teo.

She wrote that the flower "exudes dignified elegance", while its vibrant colour and parentage symbolise the resilience and nurturing nature of mothers in Singapore.

"The Aranda Mothers of Singapore embodies the qualities we treasure, and I hope it would be an inspiration to future generations of Singapore women," she said.

She said: "If families are the basic building blocks of society, then mothers, in my view, are the super-glue that bind our families together, keeping our society strong."

Ms Teo wrote that mothers have a simple wish for their children - that they are able to fulfil their potential, and lead happy and full lives.

She added: "Let us commit to each do our best today and every day, to always build a brighter tomorrow for all our mothers, and everyone they love!"

While mothers may have been described as "super-glue" by Ms Teo, Minister for Transport Khaw Boon Wan had another analogy for them: The pillars of our families.

"Whether they are stay-at-home mums or working mums, all mothers devote their time and energy to grow their families, and help their children meet milestones," he wrote, using the hashtag #supermums.

He added that he wished that all mothers would have a well-deserved break, and "be showered with everlasting love" on this day.

Education Minister Ong Ye Kung shared an old photo of himself when he was 20 years old, flanked by two women.

In an accompanying Facebook post, Mr Ong explained that they were the “two most important mothers in my life - my mother, and the mother of my children”.

Mr Ong recalled that he had brought his mother to meet “this girl who was doing a summer course in Cambridge” at the time.

After chatting with her, his mother said that he should go after her.

“Of course I already had, but my mother’s blessing was important. Happy Mother’s Day!,” he added.

Ministers were not the only ones showing their appreciation to mothers.

The Singapore Army posted a video on its Facebook page which featured Military Expert 2 (ME2) Salizah, a senior medic in Selarang Medical Centre, and her children.

Titled My Mother, A Soldier, the video is narrated by ME2 Salizah's children, who experienced a day in the life of their mother in camp.

In the video, the children try their hand at performing cardio-pulmonary resuscitation (CPR) on a "wounded" dummy and wrapping bandages around it.

"One and two and three and four, tilt his head and lift his jaw. Mummy says he's still not well, let's repeat and do some more," says her son.

The children then take turns to say the following lines: "My mother is a soldier, and I'm very proud of her. She chose to serve the nation, although she is a girl.

ME2 Salizah's children may have experienced the medic life for a day, but Senior Staff Sergeant (SSS) Jade Mah and her two sons don the same uniform every time they go to work.

The trio were featured in a post on the Singapore Police Force's (SPF) Facebook page, where SSS Mah's sons, Station Inspector Jonathan Kang and Sergeant Jameson Kang, shared what it was like growing up with a mother who is a police officer.

"She's a tiger mum... But she was supportive and guided us when we encountered setbacks while growing up. Leading by example, she showed us that no matter how difficult life may be, we will get there," they wrote.

SSS Mah joined the SPF in 1983, and is currently an armoury supervisor.

The post added that the brothers were influenced by their mother to join the SPF.

"They feel that the best gift which they have both given to their mother would be that they have grown to become responsible adults who are making positive contributions to the society," it said.