SINGAPORE – When it comes to dating outside their own ethnic groups, Malay and Indian Singaporeans prefer their children and grandchildren to go out with Chinese and Caucasians, according to results of a study on ethnicity released on Wednesday (Nov 8).

However, among the Chinese, more were comfortable about dating Caucasians than Malays and Indians.

The Institute of Policy Studies (IPS)-Channel NewsAsia study polled 2,020 people who were recruited through geographical random sampling to ensure a proportionate representation of people across all races and age groups.

For inter-cultural romance, Chinese and Caucasian dating partners ranked high on the list.

Among Indians in the same age category, 89.3 per cent of them were comfortable about their offspring dating Chinese, compared with 87.5 per cent for Caucasians and 75.4 per cent for Malays.

For the Chinese in the 26 to 35 age group, 64.6 per cent were comfortable about their offspring dating Malays, compared with 56.5 per cent for Indians and 74.5 per cent for Caucasians.

On this, IPS senior research fellow Mathew Mathews said at a media briefing on Wednesday: “Some would say this is prejudice or it could just be the sense that because culture continues to be seen as an important aspect of people’s future and how their children are brought up, and the avoidance of all sorts of clashes and issues (in future).”

The findings indicate that Singapore “is still not the multicultural nirvana that some would expect”, said Dr Mathews.

For instance, despite high levels of interest expressed, generally less than half of respondents regularly experienced or participated in the practices and activities of other cultures. 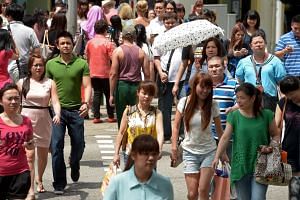 These include eating with their hands, participating in key festivals and weddings, and wearing the traditional ethnic outfits of other cultures.

When it came to understanding key facets of the Muslim community such as eating halal food, wearing the tudung for a female, avoiding alcohol and touching dogs, younger Chinese and Indian respondents were found to be less likely to understand the importance of these beliefs and practices.

Researchers said this lack of inter-cultural understanding among young Singaporeans may be a result of fewer interactions and friendships across racial lines, adding that it is a trend that “bears watching”.

Dr Mathews said: “One takeaway is that while we care about our own ethnic identities, we need to learn how to respect and understand the important (ethnic) markers of other groups.”

The researchers added that given the current levels of inter-cultural exchange, “it is worth considering if more can be done to promote greater interaction, engagement and learning across the racial groups”.