Picture the scenario: A foreign extremist organisation, made up of members of one religious group, has launched a terror attack in Singapore. Chaos ensues, and there is a heightened level of suspicion.

Would Singaporeans whose religion is implicated in the attack worry about a backlash against them by people of other religions?

The Institute of Policy Studies (IPS) report showed that four in five Muslims and non-Muslims feel there would be either no abuse, or very few and isolated incidents of verbal abuse.

One-third of Singaporeans would even be proactive in expressing solidarity with those whose religion was implicated.

Released yesterday, the study also found that after an attack, younger respondents were less likely to be suspicious of strangers of the same religion as the over-seas extremist organisation that carried out the terror attack.

The study aims to understand how Singaporeans would react following a terror attack in the country perpetrated by organisations that use religious labels, namely Christian, Muslim, Buddhist or Hindu groups. 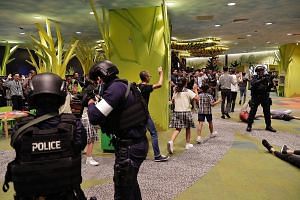 Respondents were told to imagine that news reports had emerged of a bomb explosion at an MRT station platform, with four hypothetical scenarios - that it was carried out by either an extremist Christian, Hindu, Buddhist or Muslim overseas organisation.

The study found that Singaporeans would display stronger negative reactions if it had been carried out by a foreign Muslim group than if a Buddhist, Christian or Hindu group had been behind it.

The study found that most Singaporeans feel it would take two to three years for the country to recover from an attack.

Asked how long it would take for most Singaporeans to feel united as one people, Muslim respondents indicated 3.62 years on average, the longest among the four religions.

"The findings suggest that Muslims may be more conscious of the potential backlash and suspicions that would inevitably arise within Singapore as a result of a terror attack," the researchers said.

However, they added it was noteworthy that a third of non-Muslims would be proactive in expressing solidarity in such circumstances, and they would even let others know they do not associate Muslims with such terror attacks.

But few would join a campaign or event that recognises that people of a particular religion are not the cause of the terror attack.

About a quarter of non-Muslims surveyed would do so, in the case of an attack by foreign Muslim groups.

"Still, it is encouraging that a quarter of non-Muslims would go out of their way to join such activities to show their support for Muslim Singaporeans," the researchers said.

A version of this article appeared in the print edition of The Straits Times on September 26, 2018, with the headline 'Most don't expect abuse against a community after attack'. Subscribe
Topics:
More
Whatsapp Linkedin FB Messenger Telegram Reddit WeChat Pinterest Print Purchase Article Copy permalink