SINGAPORE (THE NEW PAPER) - After offending a classmate last year, a 14-year-old girl was bullied on social media.

Jasmine (not her real name) was then ostracised in school after a video of grievances against her was circulated. The bullying carried on for nine months and got so bad that she developed stomach aches and migraines.

When she stopped going to school, her parents sought help for her at Touch Youth Intervention (TYI), which helps victims of online bullying.

Even as Jasmine is learning to cope with her emotions, a global study shows the majority of Singapore children aged eight to 12 are active on social media.

As one must be at least 13 to open an account on such sites as Facebook, Twitter, Instagram, Kik and Snapchat, they must have lied about their age or got their parents to do it for them.

Commissioned by international think-tank DQ Institute, the 2018 DQ Impact Report polled about 38,000 children in the age group in 29 countries.

In Singapore, 85 per cent of the children polled have social media accounts.

More worrying, 54 per cent of them were exposed to at least one cyber risk, with 43 per cent victims of cyber bullying, 16 per cent involved in online sexual behaviours, and 12 per cent having chatted online with strangers and meeting them. 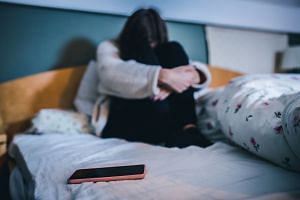 Cyber bullying can be a threat

Trends elsewhere are similar, with the global average for exposure to cyber risks at 56 per cent, with Oman ranking highest at 78 per cent.

A similar survey of 1,200 children aged below 14 by the Infocomm Media Development Authority in 2015 showed 60 per cent started using social media between the ages of seven and 10, and 13 per cent started at six or younger.

Local experts feel it is crucial for parents and caregivers to teach children to adopt cyber wellness values and think critically online.

She told The New Paper: "They need to be able to evaluate who they are interacting with, the value of online content, and the reliability of sources of information.

"This is almost like us teaching our children to 'be careful' and 'don't talk to strangers'. Parents must understand that the same set of cautions apply in the cyber world too."

Dr Lim Boon Leng, a psychiatrist in private practice, believes some parents may start social media accounts for their children at a young age without thinking of the consequences.

"They may do so for the social value, or just as a fun thing to do. But they may not be fully aware of such dangers as cyber bullying and sexual predators online," he told TNP.

Assistant Professor of Health and Social Sciences Jiow Hee Jhee at the Singapore Institute of Technology said: "It is important to teach our kids that our actions online have real-world consequences, and we are responsible for the information we share online."

As parents play a crucial role in developing their children's online behaviour, they must be sensitive to the problems their children may face in the cyber world, he added.

Prof Jiow, an MLC member and a cyber-wellness expert, said parents need to strike a balance between asserting their authority and being empathetic to their children's cyber challenges.

On the issue of youngsters seeking validation online via social media likes or follows, Ms Low-Lim said it is vital for them to get affirmation at home.

"Parents must build their self-esteem from a young age by being encouraging and validating their achievements," she said.

Mrs Elena Yeo, 50, said she teaches her four children to be careful of propositions online, and to not meet strangers.

"Children don't know how to draw the line, and online engagement can be even more personal than offline," said Mrs Yeo, who monitors her 12-year-old daughter's social media and Internet usage.

But she finds it harder to do that for her older children, who are 16, 19 and 22. "I just lay down some boundaries and pray that they understand," she added.

Prof Jiow said parents need to respect their children's privacy as they grow older and modify their teaching methods.

"They may want to rely more on discussions to help their children make wise decisions on their digital journey," he said.