Some 1,200 enforcement actions were taken against households for mosquito breeding from January to June, even as the number of dengue cases has continued to climb.

One of the reasons for the dengue surge is the big jump in the Aedes aegypti mosquito population, said the National Environment Agency (NEA), which is at the forefront of the dengue battle.

The NEA said it carried out more than 442,000 inspections in the first six months of the year and uncovered about 8,200 mosquito-breeding habitats.

The agency said it would not hesitate to take action against anyone responsible for conditions favouring the Aedes mosquito that transmits the dengue virus.

The enforcement actions this year could see home owners facing a fine of at least $200 if they are found to be breeding mosquitoes.

Last year, about 4,700 households were fined for mosquito breeding.

Meanwhile, Singapore has seen a spike in dengue cases this year. Last week, the number of dengue cases in a week hit a 31/2-year high, with 666 cases recorded.

We are in the peak dengue season in Singapore, which usually stretches from June to October, and the region is similarly seeing an upsurge of dengue cases this year. Urgent community action is needed to eliminate all potential mosquito-breeding habitats.

A total of 7,808 dengue cases have been reported so far this year, about five times more than the number reported in the same period last year.

There are 188 active dengue clusters in Singapore as of Thursday, the NEA said. It also said the largest dengue cluster this year, which was in Woodlands, with a total of 216 reported cases, has closed and is under surveillance.

The NEA said: "We've observed a slowing down in dengue transmission in the past seven weeks at this cluster, with no reported cases in the past two weeks, compared to 27 cases reported in a week when transmission was at its peak."

The rate of dengue transmission has also slowed down at the Chai Chee cluster, which was the third largest dengue cluster. 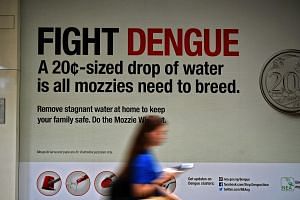 The NEA said residents in these areas still needed to remain vigilant.Other clusters of concern included those in Geylang Road, Jalan Lembah Thomson, Aljunied Road, Pasir Ris Drive 3, Changi Road and Jurong East Avenue 1, the agency said. Most of the mosquito-breeding habitats in these clusters were found in homes.

"We are in the peak dengue season in Singapore, which usually stretches from June to October, and the region is similarly seeing an upsurge of dengue cases this year. Urgent community action is needed to eliminate all potential mosquito-breeding habitats," the NEA said.

The surge in dengue cases is due to three reasons, the agency added.

Warmer weather and low herd immunity, which refers to a population's resistance to a contagious disease if a sufficiently high proportion of people are immune to it, also contributed to the surge in cases.