SINGAPORE - More Singaporean women across all age groups are staying single compared to a decade ago, according to population figures released on Thursday (Sept 27).

The increase was most noticeable among women aged 25 to 29, where the proportion of singles went up from about 60.9 per cent in 2007 to 68.1 per cent last year - a 7.2 percentage point difference.

These figures from the annual Population in Brief report on Thursday come as Singapore's total fertility rate hit a seven-year low while its population continues to age.

The resident total fertility rate fell from 1.20 in 2016 to 1.16 last year. For the population to replace itself without immigration, women need to have an average of 2.1 babies.

The Prime Minister's Office's Strategy Group, which released the report, attributed the drop partly to a larger cohort of young Singaporeans, aged 19 to 29 last year, entering peak childbearing ages, but have not yet had children. 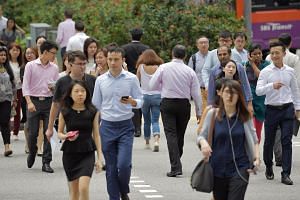 Population likely to be 'significantly below' 6.9m by 2030

Dip in population density, but not in crowded feeling

With increasing life expectancy and lower fertility rates, the proportion of the citizen population aged 65 years and older is rising, and at a faster rate compared to a decade ago.

There were 24,417 marriages involving citizens last year, 2.3 per cent more than the year before. This was higher than the average of the past decade of about 22,500 citizen marriages.

Overall, Singapore's total population stands at 5.64 million as of June this year, a slight increase of 0.5 per cent due to stable growth in the citizen population.