More than eight in 10 passengers departing from Changi Airport can check in at least four hours before their flights, with the number of airlines offering the service almost doubling from a year ago.

The counters and lounge - open from 6am to midnight daily - serve as a common one-stop service point for passengers travelling with 23 participating airlines, Changi Airport Group (CAG) said. 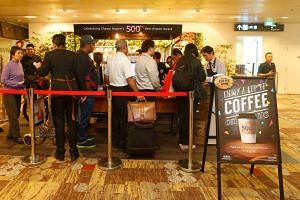 Early check-in at Changi Airport: 12 more reasons why everyone loves the Singapore icon

For these airlines, check-in is available from 12 or 24 hours before the flight's departure.

The 23 airlines serve more than 3.7 million passengers a year, or 13 per cent of passengers departing from Changi Airport. They include Japan Airlines, Thai Airways, Korean Air and EVA Air.

Besides the airlines served at the common counters, another 25 airlines separately offer early check-in services at their own counters, the airport said. These include Singapore Airlines, SilkAir, Cathay Pacific and Emirates.

Overall, the take-up for early check-in has risen from about 8 per cent late last year to 12 per cent.

The goal is to have 20 per cent of passengers checking in early by the end of next year, said CAG vice-president (passenger experience) Albert Lim.

Encouraging more people to turn up early serves both passenger interests and operational needs, he said.

Early check-in could also reduce the number of passengers who miss their flights - which currently stands at an estimated 10,000 a year.

Mr Lim said: "Early check-in smoothens the flow of passengers beyond the peak period, which starts at about two hours before departure. Reducing the peak load shortens queues and lessens the stress on the check-in team.

"Overall, there is a better travel experience for passengers. At the same time, it allows for more optimal utilisation of check-in resources, resulting in capacity and productivity gains."

Amid a manpower shortage, careful management of resources is key for ground handling firms, such as Sats and Dnata, which provide passenger and baggage processing services for airlines.

For carriers that do not operate a large number of flights to Singapore, using shared counters is more cost effective.

Mr Lim said the airport is working with hotels and other partners to create awareness of the available services.

Retired judge Nasirumulk, 65, arrived about three hours early to check in for his 4pm flight to Bangkok yesterday.

The Pakistani, who goes by only one name, said: "This is a good idea. By checking in early, I have more time for duty-free shopping."

Besides the early check-in service, 12 other reasons why visitors love Changi Airport http://str.sg/ZRWv

A version of this article appeared in the print edition of The Straits Times on March 10, 2016, with the headline 'More travellers can check in early at Changi'. Subscribe
Topics:
More
Whatsapp Linkedin FB Messenger Telegram Reddit WeChat Pinterest Print Purchase Article Copy permalink