SINGAPORE - Former inmate Mohamed Salleh used to feel he was the "trash of society" but now, he has an opportunity to contribute back to society every day.

Mr Salleh had been struggling with drug addiction and served several prison terms when he sought temporary housing for a few months at New Hope Community Service's (NHCS) transitional shelter for male former convicts in 2012.

The shelter - now named Transit Point and previously known as Shelter for Men-in-Crisis - connected him to a social worker and he also found a job as a general worker with NHCS, which he still holds.

Mr Salleh, 60, told those at the official opening of the shelter's new premises at 3 Spooner Road on Wednesday (Oct 2) that he is now happily married, has a stable job and recently received the keys to his new flat.

"I gave up on myself, but (those) at New Hope didn't give up on me. They gave me hope when I didn't have any," he said.

"I am clean for more than five years now; I am living a fulfilling life."

The shelter's previous location at a rented bungalow in Punggol could cater for only 20 to 25 residents, but the larger building in Spooner Road in Outram Park has a range of new facilities and room for up to 60 residents.

It is also more accessible and a better environment for the residents, said NHCS founder and chief executive Andrew Khoo.

"Environment is very important for running a shelter. People who come to the shelter must have a good feel, that you care and you value them," added Pastor Khoo. 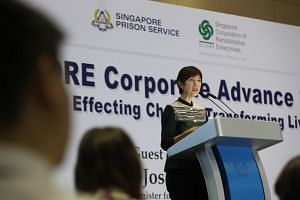 The new facilities include a larger dining area, a recreation hall and air-conditioning at night.

Transit Point is funded by the Singapore Corporation of Rehabilitative Enterprises, a statutory board under the Ministry of Home Affairs.

NHCS also offers shelter to families and individuals in other locations. Since the organisation started in 2003, it has helped more than 900 homeless people through the physical shelter and the social services it provides.

Senior Parliamentary Secretary for Health and Home Affairs Amrin Amin said at the launch: "What they (the ex-offenders) need is a strong ecosystem, so that they can have that support network, so that they can bounce back and rebuild their lives and rejoin society.

"International research has shown that appropriate housing is critical for ex-offenders' social integration, and this is a key factor in preventing re-offending. Therefore, the launch of Transit Point is timely and relevant."