SINGAPORE - The number of near-misses reported has gone up, and that is a good sign that Singapore Armed Forces (SAF) soldiers are taking training safety more seriously, Defence Minister Ng Eng Hen said.

Dr Ng said that the incidents that have occurred were sometimes due to a lapse in attention or non-compliance with rules.

"But we've reached the level where you have to reach that last individual. Because you can have all the training safety regulations, you can have reminders, but if that individual doesn't follow it, then he puts himself at risk and others at risk," he said in his annual interview at Murai Camp last Friday (June 28) ahead of SAF Day on Monday.

"Effecting that change is not going to be done by seminars and lectures, you have to recognise that. It has to be something which has to be internalised, and we're measuring it by, for example, the near-misses reporting - that has gone up," he said.

While he did not give figures, it was reported earlier this year that a 24-hour safety hotline that servicemen can call to report safety incidents and near-misses receives about 140 calls a year.

Training safety in the SAF was in the spotlight earlier this year.

The death in January of operationally ready national serviceman and actor Aloysius Pang, who was seriously injured in an overseas military exercise, was the fourth reported since September 2017. This followed four preceding years of zero fatalities related to training and operations in the SAF. 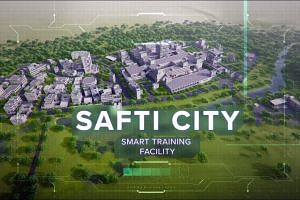 Dr Ng also gave an update on the work of the Inspector-General's Office (IGO), whose setting up was announced in January following Corporal First Class (NS) Pang's death.

The IGO, said Dr Ng, has been doing exactly what it was set up to do - going down to units, getting buy-in from commanding officers and changing practices.

The IGO, headed by the SAF Inspector-General and Chief of Staff-Joint Staff, Brigadier-General Tan Chee Wee, reports directly to the Chief of Defence Force and has full authority to scrutinise and enforce safety processes at all levels.

Dr Ng said that training safety was paramount, and it was a given that the SAF has to win the confidence of soldiers, parents and the community at large to be able to train effectively.

"At the same time, we recognise that we have to raise it to a level beyond training safety regulations (TSRs), for practice and for standard of awareness and safety culture. So it's day-to-day work; you're not going to have effects from sending out more TSRs - it won't work that way," he said.

He added that from time to time, the IGO will present its report on areas of improvement, similar to internal and external audits in finance and governance.

"I think you also need a safety report and saying that this is part of the culture which needs to be improved. So we expect the IGO to also produce that kind of report, so that people can understand where we are at and what we need to focus on."