The last two weeks of 2016 also had long weekends.

"Travellers are opting for wintry holidays in Europe and Japan to soak in the festive celebrations and enjoy a white Christmas," she added.

Her travel agency has seen an increase of about 10 per cent in people going to Japan, said Ms Seah, who attributed the larger number to more direct flights to Hokkaido and Okinawa by full service airlines and low-cost carriers.

"The demand for travel to Europe in December has doubled compared to the same period last year, including for northern lights tours," its marketing communications executive, Ms Justine Koh, told The Straits Times. Other top destinations include Japan and Australia.

As for bookings to exotic destinations such as Turkey, Egypt, Dubai and Bhutan, the number has gone up by around three to four times, Ms Koh said. This could be due to travellers' increased awareness of these places and ramped-up marketing efforts by the destinations, she added.

Even smaller travel outfits say they are seeing more customers.

Quotient TravelPlanner's co-founder Lim Hui Juan said her firm, which receives about 200 bookings a year, has seen about 45 per cent more clients travelling during this period compared to last year. Some are travelling to as far as the United States and South Africa. 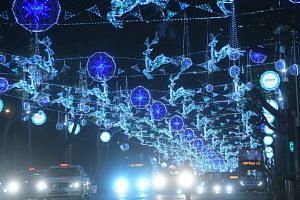 At Brand Expedia, its regional head of communications, Ms Lavinia Rajaram, said the agency saw more people looking for flights to destinations closer to home such as Kuala Lumpur and Manila for the new year. The firm did not have data for the Christmas weekend, she said.

For some Singaporeans, the holiday has already started.

Mr Loo King Keong, 57, his wife and their three children arrived in Hong Kong on Friday (Dec 22) for a seven-day holiday, thanks to the two long weekends.

"You can do a lot more things," said Mr Loo, an architect.

The family is looking forward to spending time on activities other than shopping and eating.

"Hiking is an interesting thing to do," said Mr Loo. "We thought that this would be a good time to see a side of Hong Kong that's not so built up."