SINGAPORE - People are getting better at returning their utensils at hawker centres, but though more are doing their bit, the cleanliness of these public food spaces still leaves much to be desired.

The second Public Cleanliness Satisfaction Survey (PCSS) conducted last year found that 48.7 per cent of Singaporeans cleared their tableware at hawker centres most or all of the time.

Despite patrons becoming more diligent about bussing their own tables, however, only 71.4 per cent of respondents were satisfied with the cleanliness of hawker centres, which respondents ranked the lowest for cleanliness among the public spaces polled.

In comparison, 94 per cent said they were satisfied with the cleanliness of transport spaces such as roads, bus stops and MRT stations, 84.8 per cent with commuter paths and 79.3 per cent with their neighbourhoods.

Last year's survey also found 74.3 per cent of people to be satisfied with the cleanliness of public spaces, such as stadiums, after an event, compared with 62.6 per cent in 2017.

Respondents said rubbish such as leftover food and used tissue paper was seen more in hawker centres than in other places like wet markets and on public pavements. 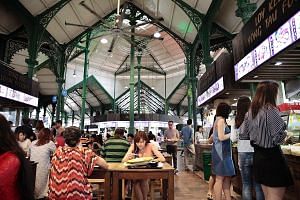 Conducted by the Singapore Management University (SMU), the PCSS polled more than 2,000 Singapore residents aged 21 and above.

"The culture of clearing our food is not consistent across all food courts and hawker centres - we have to work towards making it a social norm," said Professor Paulin Tay Straughan, Dean of Students and Professor of Sociology (Practice) at SMU, who led the survey.

"Depending on cleaning services is unsustainable for Singapore's cleanliness in the long run."

The authorities have turned to different methods to improve cleanliness at hawker centres.

For instance, in 2018, the National Environment Agency (NEA) rolled out an initiative to charge deposits for food trays, to motivate people to return them and get their deposits back.

People have to be involved in keeping public spaces clean.

"Over the years, we have taken things for granted with our army of cleaners cleaning up after us," said Mr Edward D'Silva, the chairman of the Public Hygiene Council.

Food workers said they have noticed and welcomed the greater cleanliness in hawker centres.

Hawker stall assistant Gwee Gek Moi, 46, said: "Hawker centres have indeed become cleaner than they were years ago. We hope that customers will continue to work with us in keeping our eating spaces clean."

Singaporeans say that more can be done to maintain a clean city.

"More of us should have the initiative to clean up after ourselves and be considerate."