There, he told his teacher that his ambition was to be a designer, but deep in his heart, he had doubts that he would realise his dream.

Today, the 25-year-old is a motion graphics artist, whose journey was cited by Prime Minister Lee Hsien Loong yesterday as typifying the large proportion of Institute of Technical Education (ITE) graduates who go on to upgrade themselves.

Mr Abdillah's teachers at Northlight played a pivotal role in his progress. With their encouragement, he excelled and went on to the ITE to study animation, and later to Nanyang Polytechnic, where he graduated in 2016 with a diploma in motion graphics, recounted PM Lee in his Malay speech at the National Day Rally.

The audience at the rally was shown a visual montage of his work. "Very impressive!" PM Lee declared, as he expressed his confidence that Mr Abdillah would be successful in his profession.

To help more ITE students do better, the Education Ministry will introduce more pathways for them to upgrade themselves, the Prime Minister said, adding that details will be announced soon.

Currently, seven in 10 Nitec graduates improve their skills during their careers. "This is a good statistic, but it would be even better if we can make it 10 out of 10," he added. 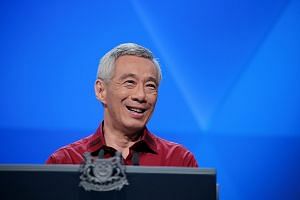 It is important they upgrade, because demand for better skills and knowledge is ever rising, he noted.

PM Lee also said the Government would ensure the fees for polytechnics and universities are as affordable as possible, even for the poorest families.

In a speech underlining how the Malay community's emphasis on education has propelled its progress, he said each successive generation of Malays has been better educated, held better jobs and led more fulfilling lives.

PM Lee gave several examples of the community's progress, including the 10-fold increase in 10 years of the number of Anugerah Mendaki (Mendaki Awards) recipients who graduated with first-class honours, from seven in 2007 to 70 last year.

He noted that more Malay parents are sending their children to pre-school, and more are attending the KelasMateMatika@CC parent-child programme, which helps with learning mathematics and encourages family bonding.

It would be even better if more parents send their children to pre-school even earlier, from the ages of three or four, he said.

PM Lee said the quality of pre-schools has improved, and fees are now more affordable. "With government support, the cost of full-day nursery or kindergarten for a needy family can be as low as $3 (a month)," he said, adding that the Government will ensure that pre-school education is more affordable for the middle income as well.

A version of this article appeared in the print edition of The Straits Times on August 19, 2019, with the headline 'More paths for ITE students to upgrade themselves'. Subscribe
Topics:
More
Whatsapp Linkedin FB Messenger Telegram Reddit WeChat Pinterest Print Purchase Article Copy permalink