SINGAPORE - Technological advancements should help workers do their jobs better, not replace them, said Deputy Prime Minister Heng Swee Keat on Wednesday (May 1).

And Singapore is making sure of that by preparing workers for the jobs of the future through lifelong learning, one of three key strategies as the nation transforms, he noted in his speech at the May Day Rally at Downtown East.

"We can't protect jobs that will be made redundant. But we can and will protect workers - every working man and woman," he said.

Addressing more than 1,600 unionists, workers, employers and Cabinet ministers on his first day as DPM, Mr Heng said that the other two strategies involve transforming the economy and pursuing inclusive growth.

These come amid the challenges of rapid technological advances, the changing workforce profile and sharper global competition, which may cause some workers to feel left behind.

On Wednesday, he announced that companies will be able to tap an extra 10 per cent in funding support through the Enterprise Development Grant, if they work with unions to train workers as jobs transform.

This will be provided from April 1 next year by the National Trades Union Congress (NTUC). The grant currently provides up to 70 per cent of project costs for companies to upgrade, innovate and venture overseas.

The extra funding applies to unionised companies and partners of the Employment and Employability Institute which set up company training committees (CTCs).

They must also commit themselves to positive worker outcomes, such as raising salaries of low-wage workers or reskilling, said Mr Heng, adding that union leaders had told him they wanted more support for unionised workers.

These include raising salaries of low-wage workers and reskilling, said Mr Heng.

He said the labour movement plays a critical role in the strategy of economic transformation by helping to communicate changes, win support and rally workers to be on board with changes.

Through CTCs, unions will work with employers to identify courses and customise training so that workers can develop relevant skills for particular jobs.

NTUC secretary-general Ng Chee Meng said in his May Day message on April 25 that NTUC will set up 1,000 CTCs over the next three years.

Mr Heng called this initiative "far sighted" and "a game-changer". 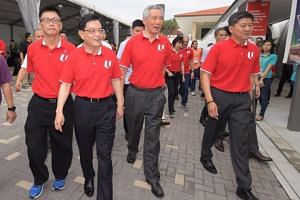 "Unions are well-positioned to strengthen both," said Mr Heng.

Some companies want only to protect their bottom lines, deploying technology and machines to replace workers, causing resentment, he said.

But others try to redesign jobs and retrain workers so they can be redeployed. In turn, workers earn higher wages and improve their lives - a win-win outcome.

He cited homegrown cleaning company Chye Thiam Maintenance, which signed an agreement with the Building, Construction and Timber Industries Employees' Union last week to set up a CTC.

It is hard to hire and retrain workers, as cleaning is not an attractive task, but the company is investing heavily in training so its workers can confidently operate new equipment and processes, he added.

CTCs reflect how the "unusual" labour movement is deepening partnerships with employers, rather than leaving training and skills upgrading to the private sector or governments to initiate, said Mr Heng.

"This is the remarkable capacity of our labour movement - to be the co-agents of economic and social transformation. And this capacity is something we must continue to strengthen," he added.

He recounted a trip to Silicon Valley with school leaders when he was Education Minister to study educational technologies.

The school leaders said they liked the creative use of technology, but not how technology was used to replace teachers.

In Singapore, technology is instead used to augment what teachers can do.

Efforts like SkillsFuture and Professional Conversion Programmes have helped workers do well amid economic transformation, but more can be done in thinking about how workers can develop skills for jobs that do not yet exist, he said.

He added that unions can help to develop the right attitude among workers towards upskilling and reskilling, so that they are not fatalistic about change and economic transformation.

As for inclusive growth, Mr Heng said the Government is studying how to help people who have low balances in their Central Provident Fund savings accounts after leaving the workforce early or because they did not work consistently.

Details will be worked out in the coming months.

The labour movement and Government are also paying particular attention to lower-wage workers and seniors, he added.

"This is how we keep our country together."