SINGAPORE - Increasing numbers of seniors who cannot work due to old age or illness and a lack of family support are behind the steady increase in the number of families receiving long-term financial aid.

There were 4,409 households on the government scheme run by the Ministry of Social and Family Development (MSF) in the 2017 financial year, up from 4,387 families in the preceding 12 months.

Social workers and sociologists told The Straits Times that the increase in those needing long-term support was due to a range of factors, from Singapore's ageing society to more people remaining single and shrinking family sizes.

Elderly folk in the scheme used to hold low-paying jobs and may now find themselves in dire straits when they fall ill or cannot work due to old age.

With fewer children, and if the children themselves are also struggling to cope financially, it is harder for them to support their elderly parents in need, said Mrs Tan-Wu Meiling, executive director of Shine Children and Youth Services. That forces many of these seniors to turn to the Government for aid.

The latest data was contained in the Community Care Endowment Fund (ComCare) annual report for the 2017 financial year released on Thursday (Oct 4) by the MSF. 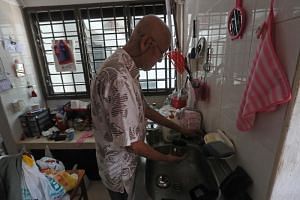 Social service hubs to help needy will be round the corner

ComCare is a key social safety net. Its programmes, such as those providing long-term and short-to-medium-term assistance, provides a financial lifeline to struggling Singaporeans.

The long- term assistance scheme, also known as public assistance, is meant for destitute individuals who permanently cannot work due to old age or illness, and have little or no family support.

A one-person household on the scheme gets a monthly sum of $500, while two-person households get $870. They also enjoy a host of other aid such as free treatment at polyclinics.

Most people in this scheme are poorly educated, elderly singles who live alone.

Social workers and sociologists had mixed views on whether the numbers on the scheme will rise.

While some told The Straits Times that more seniors will need long-term help as the population continues to age, others said the future generation of elderly are more likely to stay healthy and in work given the Government's push to get people to mind their health and remain employable, among other factors. Sociologist Tan Ern Ser said: "All things being equal, future seniors are likely to be better educated, more employable and employed. They perhaps have a longer healthy life expectancy."

Meanwhile, the number of households on the ComCare student care fee assistance scheme has also risen. The scheme helps low-income families meet the fees for student care centres for children aged between seven and 14. Families get subsidies of up to 98 per cent of the fees.

Minister for Social and Family Development Desmond Lee said in a statement: "ComCare continues to be a key social safety net with ComCare assistance increasing over the years.

"For families with more complex needs, we are partnering closely with government and community agencies to better coordinate and integrate our delivery of social services."