SINGAPORE - A 995 call is received at the Singapore Civil Defence Force (SCDF) headquarters and the flustered caller says someone is unconscious and not breathing.

The operator calms the caller down, asks questions to understand the situation before guiding him to perform cardiopulmonary resuscitation (CPR).

This "life-saving instructor" is not an SCDF officer but a nurse.

Nurses have been stationed at the SCDF operations centre since 2011 to take callers through what to do in an emergency, and the collaboration is paying off.

This started with four nurses from Singapore General Hospital (SGH) in 2011. Since then, the proportion of cardiac arrest victims who were given CPR by members of the public has risen from 22 per cent in 2011 to 54.1 per cent in 2015.

Last year, an agreement was signed between SCDF and SingHealth, Singapore's largest public healthcare group which runs institutions including SGH, increasing the number of SingHealth nurses to be seconded to SCDF to 14. 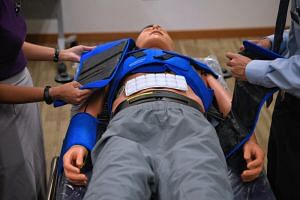 They have come up with suggestions on what questions to ask to better understand the situation. For example, instead of asking the caller if the victim is breathing, they can ask the caller to see if the person's belly is rising and falling.

"They have come up with some good research, and we've made modifications to the questions we ask on the phone," said Dr Shalini.

The nurses can also access the National Electronic Health Record, and relay relevant medical information to paramedics, such as the patient's medical history and drug allergies.

For the nurses posted to the SCDF, one challenge is communication.

In a hospital, they meet their patients face to face and can understand their needs by looking at them. But in the SCDF operations centre, they have to rely on the caller.

They also have to deal with impatient callers.

Senior staff nurse Muhammad Firman Muliadi, 27, whose previous posting was at SGH, said he was scolded by callers when he first started at the SCDF as he would stutter over the phone while going through the set of questions.

His colleague, senior staff nurse Geraldine Goh, 30, said there is a lack of understanding among the public, that questions asked by the 995 operator are actually to help the patient.

Ms Goh, who was previously with National University Hospital (NUH), said that staying calm is challenging yet crucial for the role they play.

People can get very anxious, especially when an infant or child is involved, she said, but operators have to stay calm so the other party will listen to instructions.

Not all cases have happy endings.

Ms Goh recalled a case handled by her colleague, involving a 12-year-old girl who called 995 after her mother had a cardiac arrest.

"We tried to ask her to do CPR, but she was too distraught already. She was telling the call taker, 'Is my mummy going to die? I got no daddy already.'. We were heartbroken when we heard that. It was quite sad, I think the mum didn't make it."

Apart from saving lives, the nurses have the unusual task of helping in delivering lives too.

"We also have a lot of child deliveries over the phone," said Ms Goh, who has helped deliver about 10 babies in her time at the operations centre but has never got to meet any of them.

For Ms Goh, the SCDF posting is especially meaningful.

Her father had died after suffering a cardiac arrest when she was 10, as nobody around him knew how to perform CPR, and she wants to prevent someone else from suffering the same fate.

"If there's a cardiac arrest case, someone can at least try to do something to help save the victim's life. If this was my dad back then, I believe he could still be very much alive today if someone did CPR on him before the ambulance arrived."