SINGAPORE - A lantern in Chinatown received a facelift for the upcoming Mid-Autumn Festival following complaints from netizens.

Some said the two-storey lantern of the mythical character Chang'e bore little resemblance to the goddess of the moon as its facial features looked too masculine.

The next day, people were shocked to see that the moon goddess had softer features and sported a different set of hair accessories.

Facebook user Nikki Fong said: "She has become a woman again. (The repainting) is so effective!"

A total of 12 people helped fine-tune the Chang'e lantern, according to a spokesman from the Chinatown Festivals organising committee. 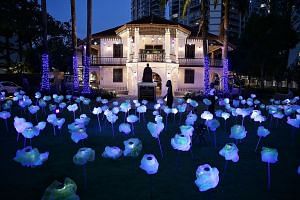 The street light-up design is segmented into three eras - tracing Singapore's progress from a free port in its early days to independence (1819-1965), to building a global city (1965-2019) and to visualising a Singapore of the future, said the spokesman.

The light-up, which will feature a total of 168 lanterns, captures nostalgic and familiar scenes such as attap huts, coolies, Samsui women and trishaw riders juxtaposed against the Singapore skyline.

The design is a collaboration between students from the Nanyang Academy of Fine Arts and the festival organising committee. They worked closely with craftsmen from Sichuan province in China.