SINGAPORE - The Ministry of Manpower (MOM) has slapped a record $140,000 fine on a transport firm owner for causing the death of a worker.

The ministry imposed the fine on Ong Chin Chong, the sole proprietor of Hiap Seng Lorry Enterprises, on Sept 2 for a fatal incident in 2016.

The fine is the highest ever imposed on an individual under the Workplace Safety and Health Act, the MOM said in a statement on Friday (Sept 13).

Ong operated the lorry crane and supervised the lifting operation, while his workers were tasked to rig and align the bundle of wire mesh during lifting.

The bundle of wire mesh, which was 5.9m long and 1.35m wide, slanted while it was being lifted, and Mr Kumar and Mr Karthik were attempting to align it with their bare hands when it dislodged. 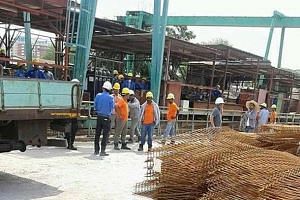 He was pronounced dead at the scene by paramedics.

The Straits Times' report of the incident in 2016 said that a worker who was at the scene saw Mr Kumar's throat pierced by the wire mesh.

The MOM said that its investigations revealed that Ong had failed to ensure the lifting chain was in good condition and of adequate strength and construction before instructing his workers to use it.

The ministry also found that Ong did not ensure his workers were trained to perform lifting operations. Both were employed as technicians and neither had attended courses on safe lifting operations or received briefings on proper rigging or lifting methods.

Finding lapses on Ong's part, the MOM said: "Ong failed to appoint a lifting supervisor, rigger and signalman for the lifting and rigging activities and implement a lifting plan for safe lifting operations, which are requirements under the Workplace Safety and Health (Operation of Cranes) Regulations 2011.

"Trained personnel would have been able to ensure that the lifting and rigging activities were performed in a safe and secure manner."

Unipac Transport Service and Sunway Concrete Products were fined $60,000 and $160,000 respectively, for the fatal incident.

The MOM's director of occupational safety and health, Mr Sebastian Tan, said: "As the employer, Ong disregarded his workers' safety and essentially left them to their own devices to manage the lifting activities. He failed to establish basic requirements such as (having) a lifting plan and did not ensure that his workers were trained to conduct lifting operations."

"Tragic accidents such as this can be averted if we all play our part in managing the hazards associated with high-risk operations such as lifting," he added.

Seventeen workers died from workplace accidents in the first half of this year, the fewest since 2006.

The Tripartite Strategies Committee, which comprises government officials, union leaders and companies chiefs, has set the goal of reducing Singapore's workplace fatal injury rate to less than 1.0 per 100,000 by 2028.