The night before an 8km fast march, Corporal First Class (CFC) Dave Lee Han Xuan and his platoon mates were punished for about 30 minutes as two soldiers had used their mobile phones after lights out, despite repeated warnings.

The punishment for perceived lack of teamwork involved the entire platoon of soldiers, garbed in their No. 4 uniforms and with assault bags, being made to do physical exercises such as bear crawls, sprints, leopard crawls, push-ups and crunches.

The punishment goes against an army directive, according to preliminary findings of a Committee of Inquiry (COI) on the death of the full-time national serviceman (NSF) in April, Dr Ng told Parliament yesterday.

The day before he collapsed, CFC Lee did an interval training run at a faster pace than he was required to, with a shorter rest time between laps. This was a breach of training safety regulations.

Dr Ng said the reason given for these deviations was that the commanders wanted to enhance fitness and foster greater cohesion by keeping the platoon intact, so during the training run, the soldiers ran at the same pace, not in groups.

These factors could have contributed to the heatstroke suffered by the 19-year-old from the 1st Battalion Singapore Guards after the fast march in Bedok Camp on April 18, which he completed.

He died on April 30, two weeks after he was admitted to Changi General Hospital.

The COI found that more than two weeks before the fast march, CFC Lee had been taking medication following a visit to Jurong Polyclinic on March 31 for an acute upper respiratory tract infection, said Dr Ng.

Aside from the physical exercises, the soldiers also had water poured over them, and the punishment session ended with the troopers reciting the Guards' creed a few times in a high-kneel position.

For the 8km fast march, the COI found it was done in line with SAF regulations, except for the lack of seven hours of uninterrupted rest.

Before the march, CFC Lee had taken his temperature, which was normal at 36.3 deg C. 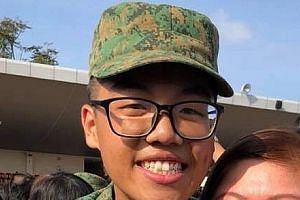 NSF dies after being warded for heatstroke

He was happy in the army and had a lot of friends, says mum

Zero-tolerance approach to abuse of soldiers in SAF: Eng Hen

He also did his warm-up exercises and his buddy observed that he seemed to be his usual self.

After he completed the first 6km, he had a mandated 20-minute rest. As he was moving off for the last 2km, he told his commanders he had cramps in his calf muscles. They advised him to stretch, which he did, and he was encouraged to complete the march.

He was the last person to complete the march in around 100 minutes, including the break.

As he was walking to the support company line, he seemed to be disoriented and was immediately attended to by the commanders and medics. They thought he was suffering from physical exhaustion. His pulse was assessed to be normal and his skin felt cold to the touch.

He was given first aid and water, his equipment was removed and his uniform unbuttoned, and ice packs were placed at his vital points. Water was also poured on him. When he did not improve, CFC Lee was evacuated to the medical centre.

The COI noted that the cooling measures taken were inadequate, including the failure to use on-site intravenous therapy, the improper placement of ice packs and the improper use of a ground sheet.

It also noted that there was a significant gap between the onset of symptoms and his arrival at the centre.

The delay was because the people attending to him mistook his symptoms as due to physical exhaustion, said Dr Ng. "Though trained, they had never encountered any previous case of heat injury themselves."

Dr Ng also said there were several suggestions for CFC Lee to be evacuated, but these calls were either not heard or not heeded.

The COI believed the significant delay could have escalated the heat injury to a heatstroke. Full body cooling should have been given quickly and within 30 minutes of the symptoms showing, it added.

CFC Lee was semi-conscious when he arrived at the Bedok Camp Medical Centre, with a temperature of 42.7 deg C. Two bags of fast intravenous (IV) drip were administered, and he was also placed in the body cooling unit for two cycles.

When he did not respond, he was sent to Changi General Hospital.

Dr Ng told the House that CFC Lee was an exemplary soldier who served with commitment and was well-respected by his peers for his positive attitude.

"The loss of such a good soldier like CFC Lee is deeply grievous to us," he said, before expressing the House's deep condolences to the family of the late CFC Lee.