SINGAPORE - From early next year, operationally-ready national servicemen (NSmen) who do well for their annual fitness test at Maju Camp will not face the usual wait of around two weeks to receive their cash incentive awards.

Instead, upon completion of their Individual Physical Proficiency Test (IPPT), the money will be credited to their bank account immediately via PayNow, an instant funds transfer service linked to people's mobile phone or NRIC numbers.

The scheme will be piloted at Maju Fitness Conditioning Centre (FCC) at Maju Camp in Clementi early next year before launching in Bedok, Khatib and Kranji FCCs by the middle of the year.

Maju FCC has the highest number of NSmen IPPT participants among the four FCCs.

The exact launch dates of the pilot at Maju FCC and the other FCCs will be released on the NS Portal website.

The initiative was announced by Defence Minister Ng Eng Hen on Thursday (Oct 4) during the Ministry of Defence (Mindef) Productivity and Innovation in Daily Efforts (Pride) Symposium 2018 at Nanyang Polytechnic in Ang Mo Kio. 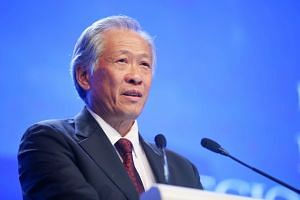 The annual event recognises the achievements and contributions of units and individuals in promoting a culture of organisational excellence, innovation and productivity in Mindef and the Singapore Armed Forces (SAF).

Dr Ng said the initiative was an example of ideas that can make "a huge difference" to the daily functioning of the SAF.

"So as you run your 2.4km (one of the components of IPPT) and cross the finishing line, you can hear the 'chink' (sound of money)," he said, to applause from the audience.

"I exaggerate somewhat, but basically you get it on the same day as your IPPT. And I think IPPT NSmen will appreciate this small idea (that) will have (a) big impact."

Currently, NSmen who do well in their IPPT have to wait around two weeks to receive the awards in their bank accounts through Giro.

To receive money via PayNow, an NSman has to register for PayNow with his preferred bank and link his PayNow account to his NRIC number, before taking his test.

NSmen who do not register will continue to receive their awards through Giro.

Gym owner and NSman Ng Wei Li, 27, is  glad that the SAF is taking steps to improve its efficiency. He said: “It’s unlikely that more NSmen will be motivated to do well to get the incentives, but it’s definitely a value-add for those who bother to train for their IPPT.”