SINGAPORE - He had hopes of proposing on the peak of Mount Kinabalu.

While it may have chewed up a big chunk of annual leave for most full-time employees, marketing head Ng E-Fei's dream became a reality with the help of his employer's flexible work arrangements (FWA).

The 34-year-old was able to schedule work commitments around training in Johor Baru for the climb, medical appointments and even searching for the perfect engagement ring - all made possible because his employer, GorillaSpace, offers a variety of work-life programmes to all their 15 employees, including unlimited annual leave and working from home.

Mr Ng said: "I decided to join GorillaSpace for a combination of factors, one of which was its good work-life programmes."

For a while, however, work-life balance eluded him. The entrepreneur had his own start-up, which he left in 2015.

He then worked in marketing for a multinational corporation before quitting last year after a serious health scare.

He cited years of work stress as a contributing factor.

"During my entrepreneur days, it was a lot worse because I drove myself very very hard. As a start-up entrepreneur, you're pretty much on the job 24/7," he said. 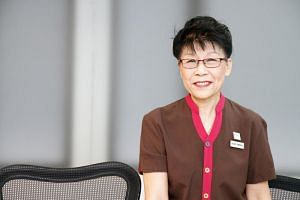 She's happy working at 72, thanks to hotel's flexi-work arrangements

Power of flexi-work options in a tight labour market

Now, Mr Ng says work-life balance is one of his core values, and that flexible work arrangements are one of the things he looks for in a job.

GorillaSpace, a marketplace that helps businesses find work spaces, measures employees based on performance output instead of effort put in or physical time spent in the office.

Mrs Ginny Tham Eckblad, its co-founder and chief operating officer, said work-life initiatives are an obvious component of workforce planning and should be made available to all employees at all life stages. Paradoxically, it took some convincing to get all 15 staff on board with the programme.

Some were fresh graduates who were eager to learn from more experienced peers, so working from home, for instance, felt like taking a step back.

"It's a 'fallacy' to assume that millennials don't want to work or be in the work environment. The challenge was to let them know that the option is available to them when they need it and not forced onto them," she said

Mr Ng said of the initiatives: "I like our Friday company lunches and regular outings, it's a nice time to bond as a company, as a team. It's also nice that the company sponsors it."

After months of preparation and his whole team backing him, Mr Ng finally proposed to his girlfriend in April on the peak of Mount Kinabalu.

"I felt like the team was so supportive, one of my colleagues even suggested and helped me with a professional photo shoot."

And the best part? She said yes.