Though the 42-year-old had several invitations from friends who welcomed him to visit their homes, he was homesick and preferred to spend most of the day video-calling his family back in Jilin, north-east China.

Every year, his family there celebrates the new year by making and eating jiaozi (dumplings), setting off firecrackers and catching the annual Spring Festival Gala show on television.

"My family usually eats dumplings on the eve, first day and second day of the new year," said Mr Wang Yong, who is a metal worker in a manufacturing firm.

Yesterday, he and 150 other Chinese migrant workers gathered to eat dumplings together and celebrate the Chinese New Year.

A non-profit organisation for migrant workers, Labour Arty, and a community of migrant Chinese in Singapore co-organised the dumpling party for Chinese foreigners who were not returning home for the new year.

"We hope that there can be a festive, homely atmosphere even for those who cannot see their family this holiday due to financial or employment constraints," said Mr Ou Ningfei, 29, one of the founders of Labour Arty.

The dumpling party has been an annual affair for the past seven years, though the event has grown in size in recent years with the attendance tripling to 150 from when it started.

This year, more than 2,000 dumplings were prepared.

I can't afford to fly back home this New Year but the party helps to ease the loneliness and create some atmosphere.

MR WANG YONG, who hails from the north-eastern part of China.

When the event was first held, the migrant workers would pitch in to help make the dumplings from scratch and cook and eat them on the spot. 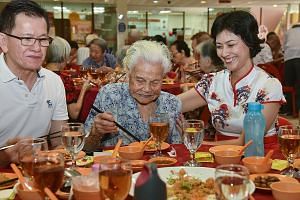 This year, however, due to the large volume of dumplings, volunteers prepared them in their homes or dormitories and took them to Jurong Christian Church, where the event was held.

Large cauldrons of boiling water were laid out in its walkway and steaming plates of dumplings were then served to the migrant workers, who came from nearby dormitories.

They included a Chinese chef who volunteered to help oversee the kitchen and logistics for the day.

Labour Arty's vision is to "move from awareness to appreciation of migrant communities" in Singapore by using arts and culture to promote a deeper understanding and sensitivity towards them.

Mr Ou himself was born in China but moved here when he was seven.

"Having dumplings for Chinese New Year is like what yusheng (raw fish salad) is for Singaporeans. We want them to have a chance to celebrate the new year in a way that is recognisable for almost everyone from China," said Mr Ou, a civil servant.

For Mr Wang, dumplings evoke special memories. His province is known for a variety of pork dumplings to which pickled vegetables are added.

"My wife can easily make 50 to 60 dumplings in 20 minutes," said Mr Wang, who has two teenage children.

"I can't afford to fly back home this New Year but the party helps to ease the loneliness and create some atmosphere."