SINGAPORE - School-going children in Singapore will soon be using a pocket-sized, codeable computer, called the micro:bit, to pick up coding skills. The move is aimed at instilling passion for technology among young Singaporeans.

The Infocomm Media Development Authority (IMDA) will work with the Ministry of Education (MOE) to roll out micro:bit as part of its new Digital Maker Programme over the next two years.

Here's a look at what the device is about.

The micro:bit is a small computer that measures 5cm by 4cm. It can be used as a communication device, gaming console, and even incorporated into more advanced systems such as an automated watering system for plants.

Children can write codes to turn the micro:bit into a locator tool, for instance, by detecting the presence of another micro:bit tagged to their belongings.

It is already in use in schools in Britain to help teach coding and inspire interest in young people in Stem (science, technology, engineering and mathematics) subjects..

Windmill and tea maker, made using the Micro:bit

It is powered by two triple-A batteries and has 25 light emitting diodes (LEDs) arranged in rows of five that form the micro:bit's main display, where messages can be shown.

The two programmable buttons at the sides of the LED grid can be used to input commands for games, while special connectors at the bottom of the micro:bit allow it to link to external devices through crocodile clips.

It even has a built-in compass to detect the direction it is moving in, an accelerometer to detect the micro:bit's motions, and a micro Universal Serial Bus (USB) port.

Its Bluetooth low energy antenna facilitates communications and allows devices, including laptops, to talk to each other. 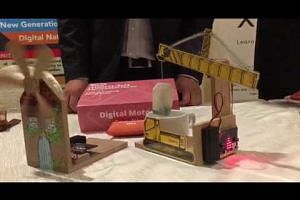 Singapore to use micro:bit to teach coding, nurture its own Steve Jobs

3. When was it launched?

The micro:bit was first launched by news agency BBC in 2016, when every pupil in the Year Seven or equivalent level of education across the UK was given one.

This was part of the BBC's education initiative to cultivate a curiosity in science and technology among young people. It aims to fill the skills gap in the UK's technology industry by getting more young people interested in coding.

4. When will it be available in Singapore?

While the micro:bit is not publicly available yet, the IMDA has already tested it at two community centres in Singapore, where it was used to create an automated water system for the community gardens.

Over the next two years, the micro:bit will be introduced to interested primary and secondary schools by IMDA and the MOE.