SINGAPORE - Craving a tub of rum and raisin ice cream at 10.31pm? From Friday (Jan 18), it will be legal to buy such alcoholic products that are not beverages from stores regardless of the hour, said the Ministry of Home Affairs (MHA) said on Thursday.

This comes after a review of the Liquor Control (Supply and Consumption) Act by the ministry.

The Act was put in place in 2015 to restrict the sale hours of liquor at retail outlets and consumption of liquor in public places. It currently applies to all products containing more than 0.5 per cent alcohol, whether they are food or beverages.

However, the MHA said on Thursday that it will be exempting all non-beverage food products from the licensing requirements of the Act from Friday.

Beverages will continue to be regulated, given the significantly higher risk of abuse, said the ministry. 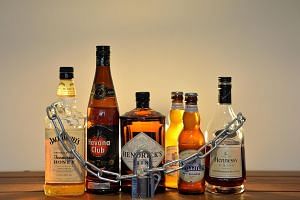 What you can or cannot do under the new alcohol law

With this change, all non-beverage food products containing alcohol can be sold and consumed after 10.30pm in public places.

The decision, which was made in consultation with the Ministry of Trade and Industry, came after feedback from the public and industry stakeholders that certain products containing alcohol need not be regulated under the Act, as consumers were unlikely to abuse them.

University student Christopher Kee, 24, said: "I think it's great that the regulation has changed. Quite honestly, I didn't understand why such products had to be strictly monitored. If your goal is to get drunk off alcoholic ice cream, you'll probably get sick from all the dairy before you even feel buzzed."

In April last year, supermarket chain NTUC FairPrice restricted the sale of Udders ice cream with alcohol content that exceeded 0.5 per cent to comply with the Act.

The MHA later said in October that it was looking into providing an exemption for the sale of such products, where there is little or low likelihood of alcohol abuse.

On Thursday, the MHA said it would work with the police to monitor the situation on the ground, and periodically review and update the legislation as required.

Udders told The Straits Times that it was "very happy" with the move.

A spokesman for the company said: "We thank the Government for taking a pro-business approach to this decision. With this change in law, we hope sales at FairPrice Finest and especially Cheers convenience stores, many of which are open 24 hours, will increase."

FairPrice director of fresh products Peter Teo said that the supermarket chain welcomes the latest update to the Act.

"This means we no longer need to restrict sales of certain types of products like ice cream that contain alcohol content," Mr Teo said.

He added that while FairPrice expects sales for these products to go up, the extent to which it will improve remains to be seen as the exemption has yet to be in place.