But the system has to evolve to celebrate broader range of skills, talents and strengths

While the ongoing debate over social inequality has led to some valid criticism of meritocracy, it is still the best model for Singapore, said Education Minister Ong Ye Kung.

But the system has to evolve, he said, to tackle new challenges and move away from a narrow focus on past academic merit to recognise and celebrate a broader range of skills, talents and strengths.

"It should translate into tangible changes in the way we hire people, admit students to tertiary institutions, grant awards and scholarships, and accord respect to fellow Singaporeans," said Mr Ong.

He was speaking yesterday at an event by charity Equal-Ark a day after the Organisation for Economic Cooperation and Development released a report on equity.

The report found Singapore to be one of the most successful countries when it comes to uplifting successive generations through education. But it noted that disadvantaged students seemed to be concentrated in certain schools, and that they found it tough to match their local well-to-do peers, despite outdoing students on the global stage.

Addressing the report, Mr Ong said that meritocracy has helped hundreds of thousands beat the odds - 15 years ago, half of students from the bottom 20 per cent on the socio-economic scale went on to post-secondary education. Today, nine in 10 do. Over the same period, the proportion of those from this group who went on to get a publicly funded degree or diploma has risen from 40 per cent to 50 per cent.

But "what used to work for us is starting to work against us", Mr Ong said. "As families do well, they spare no effort in investing in the abilities of their children, especially when they believe in meritocracy. As a result, children from different family backgrounds are pushing off blocks from different starting lines." 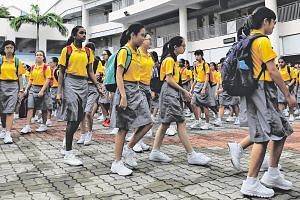 Meritocracy and the paradox of success

Singapore must ensure no one is left behind as country progresses: PM

Another headwind concerns how the proportion of students from lower-income families is shrinking.

"Ten years ago, about 20 per cent of our employed households had an income of $3,000 or less... Today, this has gone down to well below 15 per cent. But that also means that the smaller group of families that continue to remain poor are facing more difficult challenges."

Mr Ong stressed the need to recognise this fundamental point - that these challenges have arisen not from meritocracy's failure, but from its success. "So, let us not discard meritocracy, for I don't think it has finished running its useful course."

Meritocracy instead needs to adjust, he said, and the approach is to "not cap the top, but do even better in lifting the disadvantaged".

The Education Ministry (MOE) already provides more resources to weaker students. Those in the specialised schools such as NorthLight and Spectra receive around $24,000 in resourcing each. About $20,000 is spent on each Normal (Technical) stream student, and around $15,000 or less on the rest, Mr Ong said.

Around 6,000 more students from lower-income households are able to tap financial assistance schemes after the income criteria was relaxed in April. And MOE has been investing heavily in kindergartens to help lower-income families access quality early education, he added.

Acknowledging that the concentrations of disadvantaged and privileged students have intensified in certain schools, Mr Ong said more can be done to counter this "unhealthy trend". One way is to have a better mix of students in every school, he went on, pointing out that from next year's Secondary 1 posting exercise, a fifth of school places will be reserved for students without affiliation.