Mendaki has partnered with A*Star's Singapore Institute for Clinical Sciences (SICS) to conduct tests on young Malay children to better understand the risk indicators and patterns of school readiness at an early age.

The aim is to allow the self-help group to identify if additional support is needed before a child transitions to formal schooling. The results would allow Mendaki to adjust its programmes, which includes parenting courses and tuition.

Minister of State for National Development and Manpower Zaqy Mohamad, who is also Mendaki deputy chairman, revealed the five-year partnership when he spoke to reporters on the sidelines of the Mendaki Education Symposium 2019 on Saturday.

He said there was a "growing focus for Mendaki to look into pre-school and early childhood development aspects" so as to better help the community prepare itself for the schooling years.

Through the partnership, which began in April, Mendaki can "better understand the Malay community's profile and what are some of the challenges... and gaps we see in the community" needing support, said Mr Zaqy.

Mendaki is a self-help group dedicated to helping the Malay/Muslim community, in particular the bottom 30 per cent.

SICS will conduct school-readiness tests on children aged four to five from the KelasMateMatika@Community Centre (KMM@CC) programme, and use predictive analytics to determine if a child is at risk of early school failure. 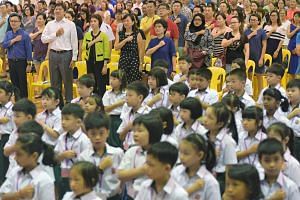 The ST Guide To... preparing your child for Primary 1

The KMM@CC programme, announced last September for low-income Malay/Muslim families with children aged four to six, is an educational programme that helps with mathematical skills.

The SICS team will also test mothers' stress levels and mental health to understand the correlation between their mental health and its impact on parenting.

"The transition from pre-school to Primary 1 is an important milestone in children's lives," said Dr Hanin Hussain, a lecturer on early childhood and special needs education at the National Institute of Education, during her keynote speech at the symposium.

It is a period of great changes, such as when a child moves from being the oldest in school to being the youngest, and losing some old friendships and having to make new ones, said Dr Hanin.

The change can be stressful, and how the child experiences it can also affect his or her socio-emotional development, such as having a sense of belonging. "This is important for a child to learn meaningfully regardless of how gifted the child is," added Dr Hanin .

The Mendaki Education Symposium was a day-long event for early childhood education stakeholders to meet and learn from one another.