SINGAPORE - As part of efforts for greater coordination, Minister-in-charge of Muslim Affairs Masagos Zulkifli on Friday (Jan 25) launched a joint office in Wisma Geylang Serai that will facilitate support given to the community between three key Malay/Muslim organisations.

The M³ initiative aims to allow the three organisations, housed under one roof, to collaborate with each other and with other government agencies to improve support for the community.

At the launch, Mr Masagos said: "The most important thing is that the public are not pushed from door to door when they come here. We believe there is no wrong door policy. Each of the organisation staff have been briefed that they will own the clients until the clients find the help that they need."

The idea was first mooted by Mr Masagos at the his inaugural Minister's Hari Raya Gathering last year. It was also highlighted by Prime Minister Lee Hsien Loong at the National Day Rally last year when he noted their aim to combine resources and volunteers.

In its first collaboration in September last year, the initiative rolled out a free educational programme that helps with mathematics skills, encourage creativity and bond families.

While the new joint office is run by Muis and Mendaki, Mesra will have a presence to coordinate support and programmes under the initiative for the community. 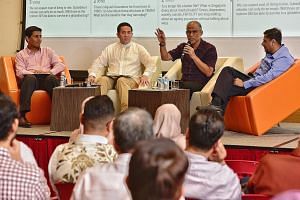 Joint Mendaki/Muis office to be set up by year's end

All three also aim to extend its outreach to the heartlands. This is Muis' first external office, outside its headquarters in Braddell Road, while Mendaki has several centres across the island.

The joint office will serve as an information and referral centre. Members of the Malay/Muslim community can get information on both national support programmes and services that the three agencies offer.

At the office, the public can make donations or pay zakat, an annual tithe given by Muslims to the needy, as well as get information on financial assistance applications from Muis.

Beyond the three agencies, the joint office will also work with eight Malay-Muslim organisations, including the Association of Muslim Professionals, the Singapore Islamic Scholars and Religious Teachers Association (Pergas) and Berita Harian newspaper, housed in Wisma Geylang Serai under a one-stop service centre called Kurnia@WGS.

From Friday to Sunday, the cultural and community centre Wisma Geylang Serai is celebrating its opening by hosting a festival called Geylang Serai: Past, Present, Future to showcase the Malay community's arts, culture and lifestyle with a flurry of fireworks, outdoor multimedia displays and festive bazaars.