SINGAPORE - Muslim couples applying to register their marriages from July 1 must first meet a naib kadi, or wedding solemniser, before their solemnisation ceremony.

The naib kadi will continue engaging the couple over the next two years, to inspire a strong and stable marriage by providing support before and throughout their matrimony.

Besides sharing advice and useful information on marriage and parenthood, the naib kadi may also refer couples to programmes and services aimed at enhancing their marital relationships, or when they need professional help.

The programme, which started as a ground-up initiative by the naib kadis, will be run by the Registry of Muslim Marriages and M³, which is an alliance of three key Malay/Muslim organisations: Mendaki, the Islamic Religious Council of Singapore (Muis) and the People's Association Malay Activity Executive Committees Council, Mesra.

Senior Parliamentary Secretary for Social and Family Development and Education Muhammad Faishal Ibrahim announced the Bersamamu (Malay for With You) programme on Thursday (May 2) at the Al-Mukminin Mosque in Jurong East.

"Bersamamu aims to make a difference to the lives of all Muslim couples seeking to marry. It underscores how couples can journey towards a strong marriage with the support of their naib kadi.

"As part of the M³ framework, it also serves as a key component of the continuum of care for Malay/Muslim families which I announced recently," he said, referring to an initiative launched on April 23 which will see government agencies collaborating with M³ to support Malay/Muslim families in marriage, parenthood, and early childhood education. 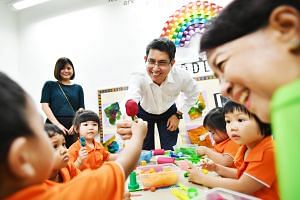 Meanwhile, the number of Muslim divorces fell to a five-year low in 2017, in part because of initiatives to bolster marriages in the community.

In the Bersamamu programme, couples must attend the free meet-up session after they apply online for a Muslim marriage application.

They will be required to meet the naib kadi once, for an hour, before their solemnisation date. Only after the first meting will the marriage be registered.

The naib kadi will also encourage soon-to-wed couples to attend Cinta Abadi, a marriage preparation course run by the Ministry of Social and Family Development.

Mr Mohamed Haziq, 30, has met a naib kadi, who is also a religious teacher, with his 29-year-old fiancee once after applying online to register his marriage.

"The advice given for life after marriage was especially helpful. It was also helpful that the Ustaz (religious teacher) raised awareness to improve our religious knowledge," he said.