SINGAPORE - By the time he was 22, Lee Yong Jie had weathered blows that are rarely dealt to someone his age: he had suffered a massive stroke, and he was retrenched from his first full-time job.

Yet, he refused to be beaten down by life, and instead is eager to pay forward the kindness he was shown.

In this new series, The Straits Times talks to millennials like Yong Jie, now 23, who have had more than their fair share of adversity, but every day, disprove the stereotype of the soft and selfish strawberry generation.

Here is his story:

I was 19 years old when I had a massive stroke. I was finishing an internship at a bank and was giving my farewell presentation that day.

I remember telling my colleagues there was more to life than work when my left hand drooped and I couldn't move it.

It was like the left side of my body had shut down. I collapsed into the chair behind me.

I thought, this must be a stroke, but surely it is impossible for someone my age to have a stroke.

Gripped by terror, I messaged my girlfriend to tell her I loved her. I asked her to tell my parents that I was sorry. I felt bad for them and guilty for dying so young.

In the hospital, the surgeons told my mother, who was frantic with fear, to prepare for the worst. I needed an operation to remove the blood clot in my brain, but they told her that even if I survived the operation, I might be paralysed.

When I awoke, the doctors told me I had a congenital condition called a brain arteriovenous malformation (AVM).

This is an abnormal mesh of blood vessels in the brain. When they rupture and bleed, it causes a stroke.

It was like finding out I had lived with a time bomb all my life and never known it. I had never had any major health problems and I used to swim, play badminton and lift weights.

For the first three or four weeks after my stroke, I couldn't move the left side of my body or do anything I had done before.

I couldn't sit up, eat or drink and I had no control over my bowels. But I was determined at least to keep speaking to people around me so I would not lose my power of speech.

I had to re-learn many things, such as how to sit up on my own, swallow and control my bladder. All the things I had taken for granted before.

But I'm stubborn and independent. Also, I'm vain. I told the hospital staff I didn't want to be seen with a cane. I wanted to walk on my own.

Still, as determined as I was, my progress was slow, and I felt depressed, lonely and frustrated.

I couldn't walk without pain. And my mother had to push me around in a wheelchair . 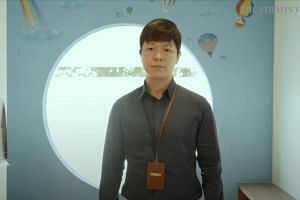 Generation Grit: Once a drug trafficker who did 'wicked things', now a social worker who wants to help others 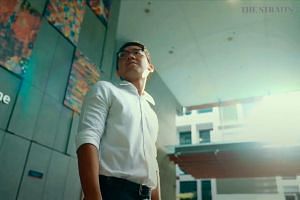 Different but just as resilient

That's how I attended my graduation from Ngee Ann Polytechnic - with my mum pushing me into the auditorium in my wheelchair - about four months after the stroke.

I had a diploma in Business Information Technology but I couldn't celebrate as I was worried about my health and the future.

I thought: Is this what it will be like forever?

In the end, what kept me going was the unwavering support of my family, girlfriend and friends.

I also met someone my age in hospital, who had brain cancer. So I felt that I couldn't give up.

I was in hospital for four or five months, after which I was referred to the Transition To Employment Programme at the SPD, a charity that helps those with disabilities.

I went there twice a week to have occupational therapy and physiotherapy. About a year after my stroke, I could walk on my own.

The SPD also helped me find a programming job at a local company providing IT solutions in May 2015. My boss allowed me to work from home.

But I was retrenched in January (2017) when the business fell on hard times. When I was told I'd been laid off, I thought, this is something else that doesn't happen to young people.

But it's okay, because I started my degree course at the Arts and Social Sciences faculty at the National University of Singapore in August. School was initially a culture shock as I'd not been studying since graduating from polytechnic in 2014.

But my results have been good so far. And next month (January), I will receive an award given out by the National Council of Social Service for promising individuals to work as social service professionals. The award will provide me with an allowance.

My ambition is to be a social worker.

I grew up in a poor family. My dad is a school bus driver and my mother is a housewife. I always wanted to be the boss of a technology firm and make lots of money. But now I feel it would be a waste of my second chance at life if I worked just for the sake of money.

My physiotherapist also told me I could use my experience to help others. I hope to do for them what social workers have done for me and my family, such as supporting me emotionally.

Before my stroke, I wanted different things. But now I cherish my health, my friends and family more than I ever did before.

And I want to make a difference to others.

This is the first part of a new series on resilient millennials.