Wearing bermudas and a short-sleeved shirt, Mr Chua Bong Siah ignored the mosquitoes buzzing around him while he relaxed at the foot of Block 55 Chai Chee Drive.

Perhaps emblematic of the uphill battle the authorities have in fighting the current dengue outbreak, the 71-year-old, who had contracted dengue in May, did not know he lived in the midst of a large dengue cluster and said he had taken no extra precautions to keep from being bitten again.

Block 55 also has the dubious distinction of being the block with the most number of dengue patients in the country. As of now, 54 residents in the block have been infected.

But getting information out to people remains a challenge, despite greater efforts to heighten their awareness.

When The Sunday Times visited Block 55 on Tuesday evening, numerous banners about dengue were prominently displayed at the ground floor and newsletters warning about dengue were on notice boards near the lift lobbies, as well as in the lifts.

But out of 30 residents interviewed, about half learnt they were living in a dengue cluster only when The Sunday Times told them. As of now, 54 residents in Block 55 have been infected. But getting information out to people remains a challenge... Out of 30 residents interviewed, about half learnt they were living in a dengue cluster only when The Sunday Times told them.

She said: "After I fell sick, my son took me to Singapore General Hospital. I had been showing some symptoms of dengue fever, and after a blood test there, the doctors confirmed that I had dengue."

After she came back from the hospital, officers from the National Environment Agency (NEA) showed up at her house to conduct checks over a few weeks, but she thought they were routine. "I thought it was normal for them to conduct spot checks. I didn't think it was because this was a dengue hot spot."

People who have contracted dengue fever could be at risk of becoming infected again and should take precautions against being bitten. Dr Lee Geok Choo, a general practitioner at Low and Lee Clinic and Surgery at Block 55, said the situation seems to have improved, with fewer cases now, after the spike in May.

According to a newsletter posted in the estate, 51 cases of dengue had been recorded in the block by June 7. Since then, just three more people have been infected.

This could be the result of stepped-up vector control operations carried out by the Marine Parade Town Council and NEA.

A spokesman for the town council said measures included weekly oiling and flushing of drains, mitigating causes of water stagnation as well as checking and destroying potential mosquito-breeding grounds in common areas. 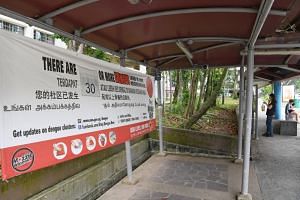 One flat also had notices posted by NEA, alerting the owner that its staff had gained access to his unit and replaced his lock after repeated inspection attempts proved futile.

While things may be taking a turn for the better, not everyone living there is taking things for granted.

A 69-year-old housewife, who wanted to be known only as Madam Fatimah, said: "My children know about the dengue situation here and are really worried about my husband and me, as we are old.

"So they got us this mosquito trap. This way we can still look after ourselves."

The HDB block with most dengue cases

With 54 reported cases of dengue as of Friday, Block 55 in Chai Chee Drive is the worst-hit block in the Chai Chee dengue cluster, with the highest number of residents affected.

In total, 119 dengue cases have been reported in the cluster, which means that just under half of the total number of dengue cases come from Block 55 alone.

The proportion of mosquito-breeding habitats found in homes in that area was also 76 per cent on average, making it higher than the national average of 60 per cent.

However, it is not the largest active dengue cluster, which is in Woodlands Avenue 6 with 214 infections.